Another Week Flies By....

We had a pretty quite week. On Wednesday Amber took the day off from work and we took four boys to the Fort Wayne Children's Zoo, always a fun outing. Of course masks were mandatory and the boys did a good job in keeping their masks on at all times. It was an absolutely beautiful day and as we went early in the morning the heat was not an issue. The Fort Wayne Children's Zoo is one of the top attractions in Indiana, so if you ever are in the area you might want to plan a visit. 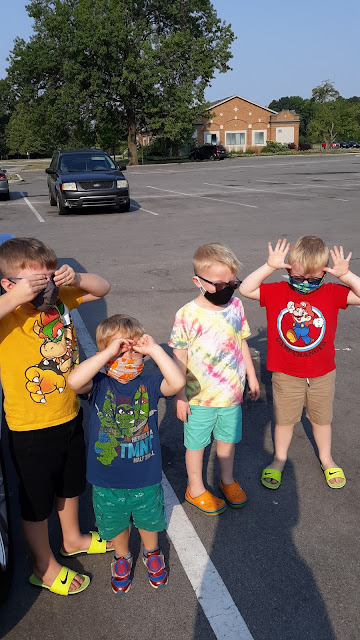 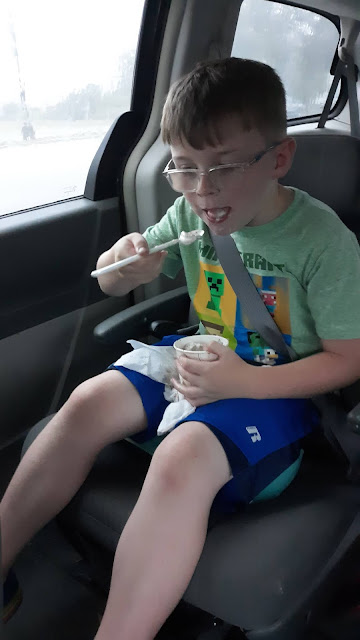 Charlie 8 is being home schooled this year, he is working on mastery of times tables, he earned an ice cream treat reward from the Dairy Sweet in Grabill. Good job Charles.
On Saturday I made my weekly trek to pick up groceries, as I drove through Leo I noticed there was some kind of arts and crafts fair getting set up, The Bloom Fest. Since I basically had the day to myself I decided to go. Later in the day I drove back to Leo, just a couple of miles, I would have preferred a bike ride but it was extremely windy, and parked at daughter Amber's house. Henry and Patick decided to walk to the fair with me, Amber took the younger boys with her to run some errands. It was a lovely stroll to the park listening to my grandsons as they talked about school, siblings, friends, and noticed giant lily pads in the river. We enjoyed the fair. I was touched when Henry said that since his mom had given them twenty dollars to spend they should really buy their mom a gift. What a nice unselfish thought. We walked past a booth full of crocheted items the boys wanted to stop there, they looked at everything and eventually selected a beautiful green and purple crocheted turtle and purple headband for their mom as she loves the color purple. We then proceed to walk around, I purchased a pair of earrings and a bracelet I really liked, and a vegan t-shirt from a vegan baked goods booth. I asked the boys if they wanted to get something to eat, they both said no and asked me if we could return to the crochet lady booth. I was a little amused that ten and twelve year old boys would ask this of their granny.  So we headed back to the crochet booth, they wanted to get some crocheted super heroes, they were 3 for $25, the boys only had $7 dollars left. I suggested they pay the $7 and I would pay the difference since they had been such good company. The boys picked out their superheroes and the crochet lady threw in a crocheted donut for free! Her booth was a hit with young boys, another grandma was drug in by her grandson while we were there.  The crochet lady said that the little crochet characters are a great seller, she had Ninja Turtles, Star Wars characters, I really rather liked the Princess Leia, Super Heroes, Peanuts characters, Princesses, and Harry Potter. 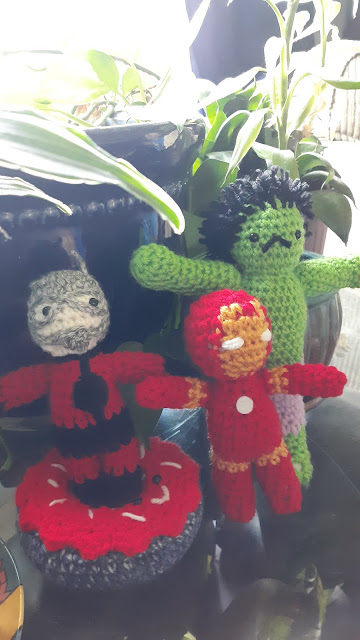 After the fair I returned home, the bread I had left rising was well ready to be punched down and made up into loaves. Then I sat on the front porch to finish my latest pair of socks. 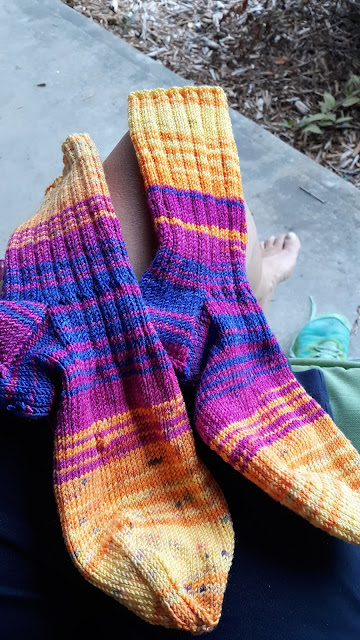 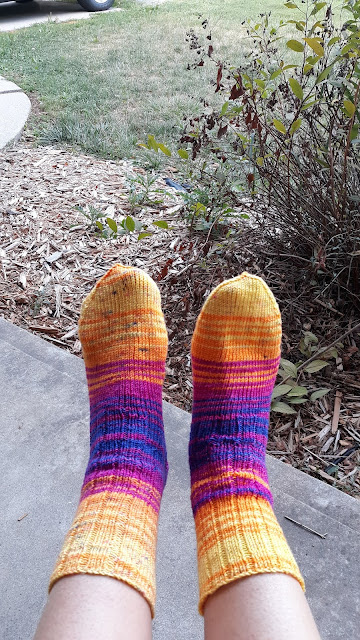 Later in the evening I worked on the wildcat quilt and listened to a dramatization of Tinker, Tailor, Soldier, Spy by John LeCarre. The quilt is nearly finished, perhaps later today it will be.
Today we don't have much planned, I will head out for a walk in a little bit, do some much needed housework, and a bit of weeding. It is a nice calm day today, so perhaps a bike ride to return some library books might be in my future. We will finish out the day with a trip to a lake in Wolcottville, IN this evening, our daughter Emily and her husband Joe are to be baptized. What a lovely way to begin a new week.
Bean
Posted by Bean at 7:04 AM

What a fun weekend...I love the crocheted characters...and the colourful socks...
~Have a lovely day!

What a lovely day with your grandchildren! I only have one of mine living nearby, and he is 18 now!! He still loves his Lego though :) xx