A nice day, and another recipe....

I was up at four this morning, took care of Dave saw him off to work and went back to bed until seven thirty. When I got up I headed out for my walk, I decided to do six miles today, the only other plans I had were to do some house cleaning, laundry, and sewing, then go to mass with my Franciscan brothers and sisters in the evening. Well as I walked I kept receiving text messages, a couple from my friend Cindy, a fellow Franciscan,  regarding our plans that evening, a couple from Emily letting me know what she was up to, she had spent the night at her friends house, a call from Matt telling me that he had had a call back from a job interview he went to on Monday and he had to go in for a second interview, and one from Amber asking if I wanted do something with her and the boys as she had the day off.  Well I walked for a bit, responded to the texts and thought about what Amber and I could do with the boys and decided that a day trip to Shipshewana would be fun.  I called Amber and she thought my idea was good and said she would be over in a bit, I told her to take her time I still had a couple of  miles to walk to get back home.
By ten thirty we were in Amber's van and heading north west on our way to Shipshewana. As Dave is working about twenty miles south of Shipshewana we decided to stop by the job site to say Hi.  Henry was very excited to see Grandpa climbing down a very tall ladder to come over to see him!  After our brief visit we continued on our journey.  By the time we arrived in Shipshewana it was noon, and I was feeling pretty hungry, we parked the van, popped Pat in the stroller and headed over to The Bread Box to get some lunch, I really enjoyed my chicken ceasar salad wrap while we sat outside on a covered, sunken, patio.  Once done with lunch we walked to the Davis Mercantile building, we went directly to the third floor to the candy store, then purchased tokens for the giant carousel.  Henry and Patrick really enjoyed the carousel!  We wandered around a few stores, purchased some adorable Cat in the Hat fabric, one print in yellow and the other in red, I will be making the boys a shirt each in the near future.  Our next stop was Yoder's General store, we looked around and then went into the grocery store section for an emergency BINKY purchase, Patrick was getting tired and we couldn't find his binky!!  As both boys were tired we decided to head home, both were asleep soon after we left and they stayed that way all the way home.
By four thirty I was off to Fort Wayne to pick up Cindy, we were heading to St. Joseph Catholic Church for evening mass.  Our Secular Franciscan Fraternity had scheduled the mass and it was said for the deceased members of our fraternity.  The mass was very nice, afterwards there was a dinner in the church basement, I guess each Wednesday evening they serve dinner, so we all got to hang out together while we ate dinner, it was good fellowship.
Matt was at our house when I returned home, great news, he was hired at Erie Haven, they have a fleet of cement trucks and do cement work, he starts on Monday and will being doing truck maintenance.   Tracy was at work so Matt stayed for dinner to celebrate his new job!  Dave cooked two t-bones on the grill, I cooked some yukon gold potatoes that I tossed with butter and parsley, made hollandaise sauce, and creamy cucumber salad, the guys then sat down and enjoyed their supper.  It is satisfying to make a meal that is enjoyed, and really satisfying when much of the food eaten we have produced, the steaks were from our steer, the potatoes and cucumber from our garden, and the eggs in the hollandaise sauce from our hens.  Following is a recipe for creamy cucumber salad, it is a favorite summer time treat that Dave really enjoys, it is very good served with baked potatoes. 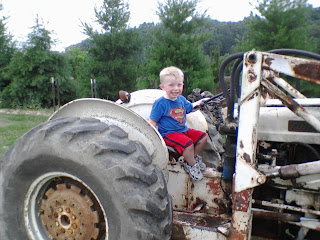 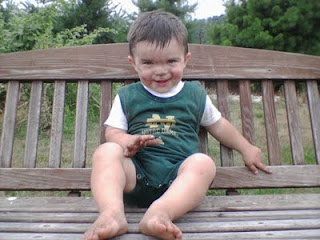 Patrick the Little Urchin!
We are in the middle of a heat wave, the temperatures have been in the mid to upper nineties since Saturday, and the humidity is very high, we are looking for a cool off hopefully by next Monday.  Today it is very overcast which has helped keep things cooler, but has done nothing to reduce the humidity.

I got up at four this morning with Dave, I made his coffee and a couple of sandwiches for his lunch, tidied the kitchen and got the laundry going.  Dave left for work at five, I showered, tidied our bedroom and headed out for a five mile walk.  When I returned I let the chickens out and Henry and Patrick arrived. After the boys ate breakfast, a nice bowl of oatmeal with cinnamon and applesauce mixed in, we went outside to hang laundry and weed the strawberries.  It is nice to get the outdoor activities done early in the morning before it really heats up, or in the evening as it starts to cool, but lately it has still been ninety degrees at nine in the evening.  While I weeded strawberries the boys played, Henry really likes to play on Grandpa's tractor, and Patrick just likes to muddle around getting into this and that and always manages to get himself very dirty!
The boys will be picked up later this afternoon and then I plan to get some sauerkraut going, I use a recipe that allows the cabbage to ferment in the canning jar for a few weeks prior to processing in a hot water canner.  In August we want to get a pig and take it in to be processed, I am looking forward to some pork and sauerkraut dinners this fall.  I also plan to make chocolate zucchini bread this afternoon, we did not plant any zucchini but we have been given some, so we will make good use of them.  If you have not had chocolate zucchini bread you really should try it, it is a delicious sweet bread, I enjoy a slice of it spread with raspberry jam - YUMMY.  Which reminds me, I need to get my raspberry jam made. I picked all of our black raspberries over the last couple of weeks, they are currently bagged and in the freezer, perhaps on Friday I will get the jam made.  It looks as if we will have a bumper crop of concord grapes in another month or so, so I know I will be busy making making many pots of grape jelly, it is a favorite in our house.
Well that is all for today, Patrick is evidently worn out from his outdoor adventure this morning, because he fell asleep on my lap as I was typing :)


***Helpful Hint***
If you have lots of zucchini, grate it, a food processor will make this much easier, then bag up in 2 cup quantities and freeze, then whenever you want to make chocolate zucchini bread you will have the exact measure of grated zucchini ready in your freezer.
Posted by Bean at 10:47 AM 4 comments:

Late Evening Walks and the Wonders of Nature 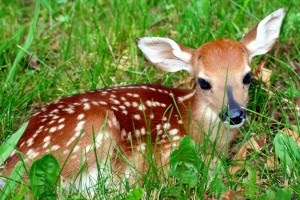 As the weather has been warm and it does not get dark until almost ten at night, I often take my daily walk in the evening. Today was very warm, it was ninety degrees outside this afternoon, it was still ninety degrees at eight this evening when I left for my walk, if I had walked at three this afternoon it would have been miserably hot. I ended up walking six miles this evening so did not get back to the house until ten. I enjoy my walks, I have time to think, I pray, and I enjoy all of the sights and sounds of the ever changing country side. There are grasses along County Line Rd that are taller than I am, and I am 5'10", insects abound, I hear scurrying in the grasses and the occasional chipmunk rushes out in front of me, I see plenty of rabbits, a ground hog who lives by the creek, red wings who chatter and squawk at me, mourning doves with their beautiful mournful cry, an occasional possum, and gold finches darting in and out of the hedgerows and thistles. The corn has grown more than knee high, tiger lilies grow wild, fragrant dogwood roses grow wild in the hedgerow and are in full blossom. The many, many shades of green I see as I look across the rolling landscape of fields, trees, grass, hedges, all contrasting with the sky bring peace to my soul. This evening as I was close to home the fire flies were suddenly out in abundance, as I walked past an open area of very long grasses I felt as if I was in Aladdin's cave, the twinkling, winking lights of hundreds of fire flies was spectacularly beautiful. One afternoon recently I was walking with the grandsons, they were in the double stroller, as we came to the same open area with long grasses I saw something, we stopped and were blessed to see a very young fawn, it was no more than a foot tall, with white spots all over it's back, a sweet little face with very large ears that needed to be grown into. Henry was impressed with the fawn, we stared at it, it stared at us and then it started and ran off towards a wooded area, it was a truly a gift to see the fawn.
I enjoy my walks in the spring slowly everything turns green, the birds return, and then suddenly everything seems to go into overdrive, the rate of growth of some plants is truly amazing, by August things are looking a little shabby, a bit over the hill, and then the queen anne's lace blooms, followed in September by the golden rod and a beautiful purple wild flower, the days are pleasant the sky a clear beautiful blue, with October the weather is a little erratic the leaves change and look amazing and suddenly it is November, chilly, damp, and gloomy, everything is resting for a season and the threat of snow is ever present. Then winter arrives, snow falls, everything is quite, sounds travel in the crisp air and January can be bitterly cold and very sunny, by February the temperatures are warming up a bit, then March arrives with wind and rain and can't seem to make it's mind up if it is winter or spring, and then we are back to April and the whole wondrous cycle begins again. So why do I walk? It is good for me, physically and mentally, it keeps me grounded, and although I walk the same roads most days the sights and sound are always changing and occasionally I am blessed with a special gift to see.
Posted by Bean at 10:16 PM 2 comments: