Guess I got tired of blogging for a while, so I didn't blog, but today I feel like blogging so here goes.  This is a lazy post, just a catch up of October and mainly in pictures.  In some ways it has been a busy month, yet in other ways not. Yesterday was a cold, windy, rainy day, Amber picked the boys up around four, so I made a big mug of tea, put a movie on Netflix, The Lady Vanishes, a 1938 Alfred Hitchcock film, and picked up my knitting. I enjoyed the tea, the movie, and got a lot of knitting done!! A lazy yet productive hour and half. What am I knitting you might ask, a v-neck cardigan for myself in a color called oatmeal in the Vanna's choice yarn line.

A week or so ago we had some rather splendid weather, an Indian Summer, a few days of highs in the seventies, it is very important to get outside and enjoy the gift of a balmy fall day. The day before, a Sunday afternoon, I started to clean up the gardens, pulled some weeks, cut back suckers on some of the fruit trees, and pulled up all of the dead plants, zinnia, marigold, tomato, green bean, peppers, then cut back the asparagus, and generally had a good tidy up.  I started a fire and burned a lot of the stuff in our campfire ring.  On the Monday afternoon I went out to burn more stuff that I had piled in the center of the tomato patch.  Once the fire was going I decided to burn all of the tree limbs and debris that came down after the bad storm on June 29. I had a fabulous time outside, my fire was amazing, in fact I ended up with two fires going and by the following morning all I had left were piles of ash that I can spread over the gardens.  I still need to clean up the raspberry canes, and do a few more clean up chores, and am living in hope that we will have another balmy fall day to do the rest of the work. 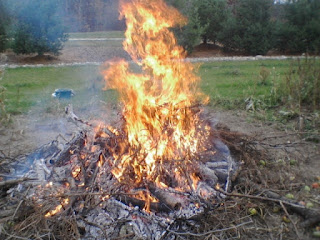 Dave and I have been enjoying board games lately, we have always enjoyed Scrabble, but one evening we were "game" for anything, we played cards, we played Othello, a game I always enjoy playing but Dave thinks it a rather silly game, we played Scrabble and then we played chess.  We only have one chess game and it belongs to our son Ben, it is The Simpson's chess set, it is rather hard to take the game seriously when Homer is King!!!  Boy when the game started I was kicking @@@, then my opponent made a sneaky move and everything went downhill for me super-de-duper-de fast!!  I don't think I won a single game all evening, but I did have a good time. 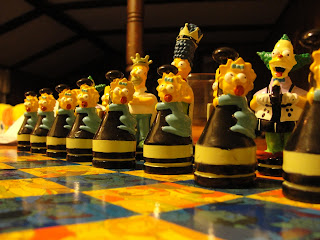 Can you believe it?? Little Charlie was 5 months old on the 10/27, he is a gorgeous little chappy!! 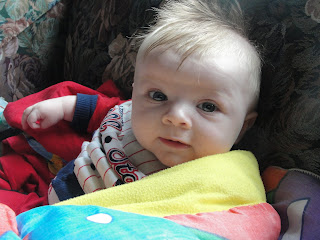 Pumpkin carving took place at our house about ten days before Halloween, some of the pumpkins we grew and Amber bought some to add to the pile. Every one had a pumpkin to carve, most of us carved the old fashioned way using a knife. Dave had to be hi-tech, he used a Dremel, and Matt and Traci decided it worked well so they used it as well. One draw back to the Dremel, it emits a fine mist of pumpkin while carving, I kept finding bits of pumpkin to clean up for several days!!! While everyone carved I made them waffles and sausage for supper. 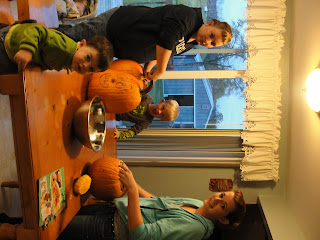 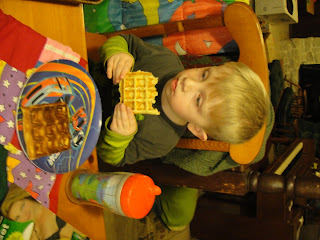 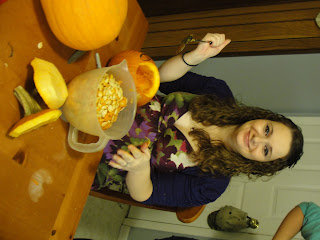 Traci means business when she cleans out a pumpkin! 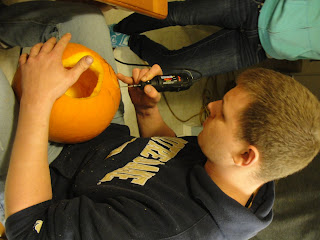 Matt being creative with the Dremel. 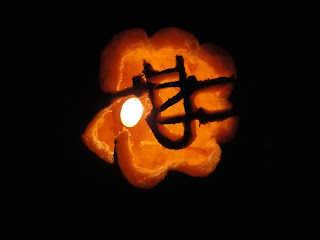 One of Matt's pumpkins, he is a Notre Dame fan - can you tell!! 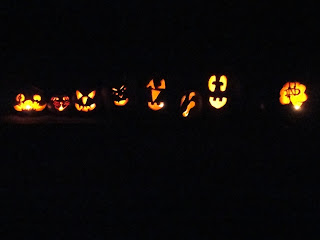 Our handiwork on display - I think they look wonderful. 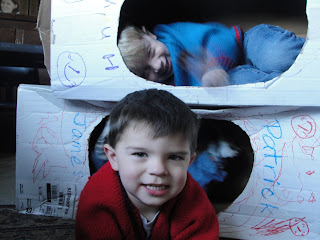 Fun in a box.  A few weeks ago Amber and Brad had a mini disaster at their house.  They have a well pit in their back yard, it is about 6 feet deep, at the bottom of the pit is their pressure tank for the well.  Brad went out to mow the grass and noticed water gushing out from under the cover on the 6 foot deep pit, YIKES!!  Dave and I went over, Dave turned off the well and went to look in the pit, the pressure tank was floating on the surface, surely not a good sign.  Anyway, long story short, once the well was shut off and the pit drained  Dave was able to install a new pressure tank, turn on the well and the little family had water again and all for the price of a pressure tank.  Our pressure tank also needed replacing, so Dave picked a new one up for us when he got one for Amber and Brad, this was very cool because now we had two identical good sized boxes for making box boats!!!  The boys were very excited and have played for hours in their boxes, they have been cars, boats, beds, houses, space ships, just to name a few things, they have eaten lunch in them, hidden in them, looked at books in them.  Don't you just love how such a simple item, an empty cardboard box, can just cause the imagine to churn and create hours of contented fun. 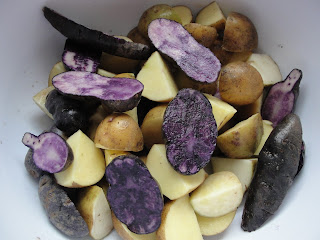 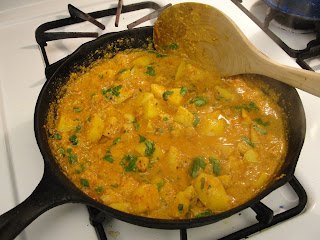 Fun with cooking.  I recently decided to try fingerling potatoes, and ventured into the trying the purple variety, aren't they beautiful when freshly cut?  I tossed them in a little olive oil and herbs and roasted them, very nice they were too.  The bottom pan is Potatoes with Garlic and Peanut Butter - an extremely good curry, I enjoyed it with Quinoa.  Don't get me started on Quinoa (pronounced keen-wa) I love the stuff and can't imagine how I ever survived without it. If you like tabouleh you will probably love it if you make it with quinoa rather than bulgar wheat.  The recipe for the Potatoes with Garlic and Peanut can be found here: http://bld-in-mt.blogspot.com/2012/10/baby-potatoes-with-garlic-and-peanut.html 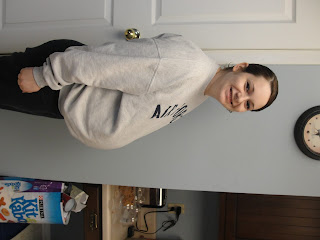 And last but not least, Traci - no Alivia has not yet arrived into this world. I took this picture on Sunday, it was  Alivia's official due date, she is not making any signs of impending arrival yet, Traci is keeping herself busy and not going too crazy with the waiting.  But we can't wait, how exciting for Matt and Traci they are going to be good parents and they are so ready for little Alivia to get here as are the rest of us.
Posted by Bean at 6:41 PM

and what a delightful set of Halloween pumpkins they are too ;-)