A busy few days have passed. Early on Friday morning my dad had his right hip replaced, this is a major surgery and recuperation is not much fun but is well worth doing as once healed you are good as new again.  Dad had his left hip replaced eleven years ago, so he knows exactly what to expect, and we all know that in a few months he will be pain free, able to walk and bike ride again with enjoyment and generally have a whole new lease on life. Please keep my dad in your prayers.

At the end of August grandson Henry turned four! Hard to believe he has grown up so quickly, he is a delightful boy and a good big brother to Patrick and Charlie. As Henry's birthday fell on a Sunday this year Amber and Brad decided to double up on celebrations and little baby Charlie was baptized, following we had a birthday/baptism celebration with good food and lots of cake!! I was very annoyed with myself when I realized during mass that I had left the camera at home and would not be able to take any pictures of Charlie's baptism. I can not tell you how annoyed I was with myself!!!! 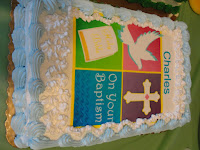 Recently we visited The Fort in Fort Wayne, the day we went they were reenacting a battle between the British, the French, the Native Americans, and the Americans at the Fort, I was a little confused on exactly what battle it was, although it took place in the 1700's.  The day was pleasant, the costumes fabulous, and the battle reenactment very exciting.  This past weekend The Fort celebrated 200 years and did a reenactment of the siege of 1812.We went but I did not enjoy this visit as much, partly because there was a large turnout of public so it was crowded, we missed the morning battle and the afternoon one was not for several more hours and although there were things to do and look at there were not enough things to occupy a several hours wait for the next battle.


When we had visited a few weeks earlier I purchased a couple of wooden cooking spoons from a booth, I really liked the spatula and ladle so was glad to find the booth again this weekend and I purchased two more spoons. 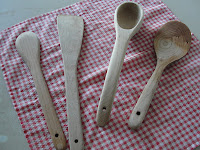 Saturday morning was the Grabill Days Parade, daughter Amber, and her son's Henry and Patrick participated in the parade so Dave and I went along to cheer them on. Amber represented her employer, Great Clips, she and a couple of other ladies she works with and their children all wore Great Clips shirts, except one girl who got to dress up as a giant bottle of shampoo, they won first place for a commercial entry and get a trophy to put in their shop.

Healthy breakfast!! Recently I purchased some Kefir, something I had heard about but never tried, well let me tell you it is pretty good and pretty good for you as it contains many pro-biotics.  I like it best with some muesli. I put 1/3 cup of muesli in a bowl, pour over a 1/2 cup of kefir, add 1/3 cup muesli, I let this sit a few minutes then mix it up and add a sliced banana - I really like this for breakfast.

Bean, I bet you could make your own Kefir! I am making our own greek yogurt these days ;)

Peace and All Good,

Send my your greek yogurt recipe, please :) I sometimes make my own yogurt and sometimes buy it. I will google kefir recipes, I would imagine if I buy some unflavored it could be used as the starter.