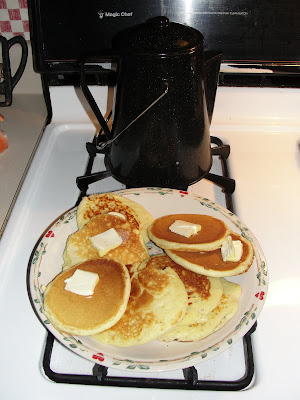 Good Grief!! The quilt I am attempting to finish by tomorrow is almost done, YEA! But my house is now a disaster :( I hope I can post a picture of the finished quilt tomorrow, it seems very likely.

The Maine Baked Beans I made the other day turned out well. I have never made baked beans from scratch before, they take about 6 hours to cook and this is after soaking the beans overnight. I do not have a bean pot so decided to cook the beans in the crockpot instead of the oven. The beans smelled wonderful as they cooked, and tasted good when they were done.

Today I need to get the house pulled back together before I do another stitch on the quilt. This morning Ben and Emily are home later than usual due to a two hour delay caused by freezing drizzle. I am going to clean up the kitchen and make them some pancakes. The kitchen is in a state, last night I planned to make chili for dinner while I worked on the quilt, then Ben decided that he wanted to learn to make chili so with a bit of direction he made it and I quilted! Everyone enjoyed the chili, but it was a bit of a free for all, Henry was here and chili is not suitable for a 17 month old, so he had a cheese toastie and apple sauce, then Emily wanted a cheese toastie with her chili, son-in-law Brad arrived so he ate chili, we had crackers all over the place, the butter was melted in the microwave rather than softened, and everyone kept bumping into each other in the kitchen! It was enjoyable chaos!
Posted by Bean at 7:26 AM