Praise the LORD!
My sister-in-law, Angie, called last evening to give us some good news regarding her lung cancer. After a very intensive course of chemo and radiation to shrink the inoperable tumor she is able to report that the tumor is now less that half the size it was and the doctor said it is a possible that the remaining mass is nothing  more than scar tissue!!!  How wonderful is that? Because of the swelling remaining from the radiation Angie cannot have a PET scan until late August, at that time they will fully determine the effectiveness of the treatment, we continue to pray for a miracle.  The only worrisome part is they discovered a spot in the left lung, the tumor being treated is in the right lung, but the doctor said it is quite likely that the left lung spot is scar tissue from the intensive radiation, we continue to pray.
My sister, Marika, continues to do well, she had her surgery in January for breast cancer, decided to forgo conventional treatment and opted for alternative treatment and seems to be doing well. Please keep her in your prayers.

I found this "video" on YouTube, I love the Doxology and really enjoyed this version and liked that the lyrics displayed.  I also like this YouTube link for Wonderful praise and worship music , again the lyrics display, and it is very pleasant to put on as there are around twenty hymns that play and all are uplifting.

The little boys are doing vacation bible school (VBS) this week.  A local church had a three morning VBS for 3 thru pre-K, so Henry and Patrick were able to go.  The theme song is ,Jesus is My Superhero , it is rather catchy, Patrick just loves watching the video.  Today is their last morning of VBS, tomorrow they will have a picnic with their new friends.

We celebrated Emily's 20th birthday this past Friday, hard to believe my baby is twenty!! Emily wanted hamburgers, seven layer salad and baked beans for her birthday feast, we were happy to oblige. And, she wanted the traditional family birthday cake, chocolate cake, chocolate frosting and m&m's. The burgers were delicious and were from one of our steers, Beef, we had him processed last month, his hanging weight was 721 pounds, that is a lot of beef, we had over 300 pounds of ground beef in addition to all of the other cuts of beef.  Noodle is still in the field filling out, he will probably go in late August, early September. 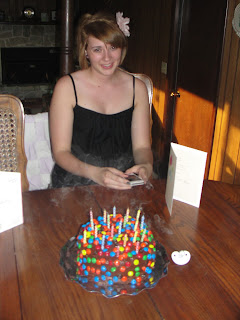 This past Sunday was Father's Day, we had a wonderful time.  Matt and Dave spent the afternoon babying baby back ribs on the grill, I made a bunch of side dishes, and strawberry shortcake, and we enjoyed a fabulous meal later in the day. All of our children and grandchildren were over, we played corn hole, Dave and I are the CHAMPIONS, we were simply unbeatable that day! 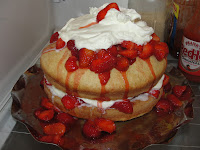 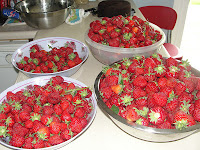 Last week our weather service called for a very severe line of storms to move through the area, they gave warnings for several days and generally had everyone worried. The storm started moving into the area around seven in the evening, Amber and the boys decided to come to our house as we have a basement, at first we sat on the deck and enjoyed a nice breeze, we could hear thunder rolling in the distance and we watched the storm clouds roll in.  We had a few spots of rain so the boys pulled their t-shirts up over their head to keep "dry". As the boys had a lot of energy to burn we went into the yard, and ended up sitting on the garden swing for a bit, all of the sudden we heard the tornado siren so decided it was time to head to the basement.  My neighbor Nancy called, could she and Brian, her son, come shelter in our basement. Amber called her husband and told him to come to our basement as the siren had gone off. Pretty soon we had three babies, seven adults, and four dogs sheltering in the basement. The wind blew, the rain poured, the lightning and thunder raged, but thankfully no damage occurred and the garden got a good watering.  We were in the basement for a few hours, Dave put on some music, I made cups of tea for Nancy, Amber and myself and brought down a tray of crackers, cheese and salami, there are worse ways to sit out storm, we all had a good time. That day I had picked a ton of strawberries and eaten a bunch of them, Nancy laughed at me when I said, after biting into a lovely wasa bread cracker and cheese with salami, "Wow, it is sure good to eat something that ISN"T a strawberry"! (oh, you noticed I had cheese and salami, I am no longer vegan, I will update in another post). 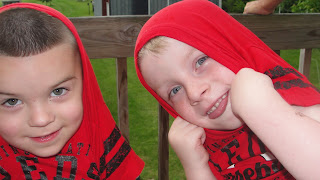 My mother has encouraged me to continue blogging as she enjoys my blog, so for now I will blog.
Posted by Bean at 8:42 AM 2 comments:

To Blog or NOT to Blog?

I have come to the conclusion that blogging seems very  self-centered.
Some questions I keep asking myself, who am I blogging for, and why am I blogging, and exactly what purpose does it really serve, and is it what i should be doing with my time?

Blogging is a bit like keeping a journal, but not really, because a blog is being written for an audience, a journal is generally for private use.

I like looking back through my blog and looking at my thoughts on particular days, my grandsons love looking at pictures of themselves on the blog, my Mom enjoys catching up with us by reading the blog, but these do not seem reason enough to keep blogging.

I am at a crossroads right now, to blog or not to blog, to close the blog or simply leave it as is, I am wrestling with the decision.  I continue to pray to seek guidance but know which way I am being called.

What are your thoughts about blogging?

We are still enjoying very mild weather, sunshine, puffy clouds, a pleasant breeze, simply delightful. Today I needed to get many things accomplished, and although I still have a few things to do yet, most are finished.

Yesterday evening we did the first pick on our strawberry patch and were rewarded with seven pounds of scrumptious berries.  While picking in the middle of the strawberry patch I noticed a squirming little mass a few feet from me, YIKES, I thought at first it was mice and let out a very undignified shriek, upon further investigation it turned out to be four baby bunnies, how sweet! 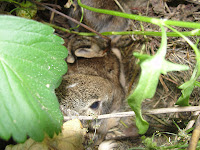 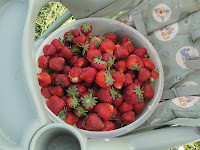 Well seven pounds of strawberries is a lot of berries so today I had to get busy and do something with them, I made four pints of strawberry jam and four pints of strawberry-rhubarb jam.  I then made enough pastry to make a strawberry-rhubarb pie and quiche for dinner. It always seems that I end up with a little leftover pastry, today I used it to make jam tarts since I had a little left over jam after filling my jam jars earlier. Amber, Henry, Patrick, Emily and me all enjoyed the jam tarts very much. 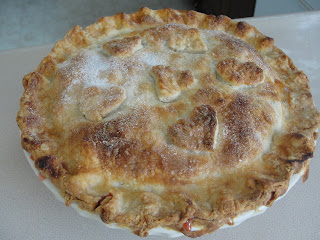 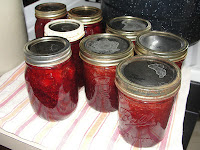 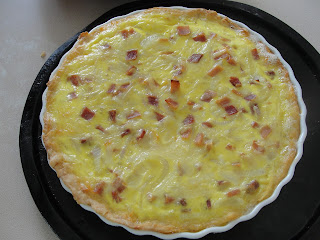 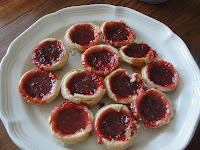 On May 26 little Charlie celebrated his first birthday, he officially turned one on the 27th. We had yet another beautiful day and enjoyed a cook out at our daughter Amber and son-in-law Brad's  home. Charlie enjoyed his birthday cake out on the deck, and we enjoyed watching him get himself covered in frosting. Isn't his little shirt cute, Amber made it for him. Charlie is such a sweetie. 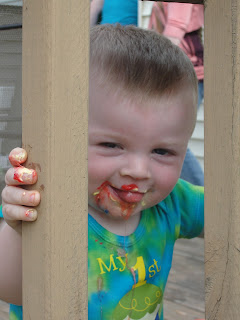 This past Monday baby Alivia turned 7 months old! I am not sure where the time has gone, all of our little grandbabies are growing up. Isn't she a cutie? She was enjoying a graham cracker when we took the picture. 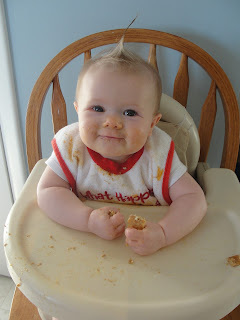 And isn't this potato cute? We thought it was just ducky :) 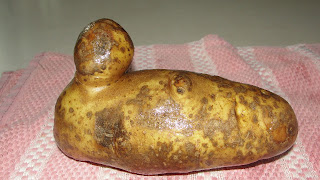 The National Weather Service stated this morning that last night we received between four to six inches (INCHES) of rain.  The thunder and lightening were almost non-stop, the rain torrential, and the wind howled away, truly spectacular. This morning we awoke to calm, cooler temperatures, sunshine and mud.

Today we decided it was time to move the new chicks from their home in the basement, they were getting super pongy and the basement smelled like a barn, out to the chicken house.  I moved the birds one by one with a large fishing net, it is easy to swoop up the bird and relocate it this way. Initially Henry and Patrick were quite interested in catching and transporting the chicks, but after the third one they lost interest, there were still nine to go.  The boys discovered a large mud hole in the back yard, to begin with it was just a little stomping and splashing and shrieks of joy, and then a mudastrophy! I came out of the basement with yet another chick only to discover Patrick the mud monster, how he managed to fall and get so totally soaked I don't know, but he was very pleased with the results.  I finished transporting chicks, we walked out to feed the steer and take a look at the gardens and by then the boys had somewhat dried out. A quick strip off by the basement door, dirty clothes popped into the washer, a sponge off in the kitchen sink and everyone was back to normal and ready for cheese toasties for lunch.