Some Memories From My Mother

Recently I was listening to an interview on BBC Radio 4 with author David Lodge. It was an interesting interview and David sounded as though he is in his thirties rather than in his early eighties. Anyway, I thought to myself if the author is so interesting what must his books be like? I did a quick search on our local library website and wowsers they own many titles by David Lodge. I left work that day and headed to our fabulous downtown library, (we truly have a most wonderful library service in our county, I think one of the best in the country), I quickly located David Lodge in Readers Services and selected four of his books to read.
I am reading the first of the four David Lodge books, I am most of the way done, I seem to have very little time to get reading in, but it is very good. In fact, I thought to myself, self your mother would really, really enjoy this book, so I emailed good old Mumpy and said you have to read this book. Wow, when I speak Mumpy jumps and she looked the book up on Amazon and ordered it. Mumpy read the book in about two days flat, she sent me email updates, to say she enjoyed it is a bit of an understatement.
The author is five or so years older than my parents, but they all grew up while World War II waged on, and all were impacted by rationing and the austerity of 1950's Britain. In the book the author is lucky enough to take a trip to Heidelberg, Germany and to experience the American way of life at an American military base, my parents moved our family to America in the late 70's. For the author, and for my parents, the American lifestyle was something unimaginable in England and life changing for all of them..
By now your are wondering to yourselves what has all of this to do with the title of my post, well a lot. As I mentioned my Mom emailed me several times as she read the book, it so resonated with her, it resonates with me too and I was born way after the end of World War II. So below I will, with my Mom's permission share her memories she emailed to me. I just loved her emails and want to keep them forever, and posting them on my blog is a great way to keep them available for many years to come.

Email #1
It arrived in the mail today.  Good golly does that not bring back
memories.  Of course, I was five years younger being born in 1939 - But
I surely remember the anderson shelters, the mickey mouse gas masks and
the morrison shelters. And, just when I thought he had forgotten about
shrapnel collecting, there it was.  I remember so well, going into the
street after an air raid and finding the warm twisted pieces of metal
laying in the road.   Just got as far as the buzz bombs!   It is
extremely readable and brings back a lot of memories.  House across the
street from where my mom and I lived was bombed just after we left to
stay at Auntie Edna's for the rest of the war.

Email #2
How well it resonates.  I am in Heidelberg now.  The visits to the
American stores reminds me of when we first came to America.  We were
overwhelmed by the variety of goods, food, et al and the inexpensiveness
of it all.  Not that we had any excess of money by any means as you will
well recall.  But we did eat a lot better and it certainly was reflected
in the waistline. Our very first bedroom set I believe is the one that
you and Dave sleep in was on sale of course. Unbelievable. You will
remember how we rushed out to every sale at 25% off. Sales only occurred
in Uk in January and August and then it would only be 10% off.  When I
worked at Clement Jocelyn in Bury they would trot out the remnant fabric
and offer it at 10% discount and any that did not sell went back into
the store room to be trotted out six months later at 10% once more.
Also  I remember Jim Miller here, in America. We were invited over for
July 4th, he placed an enormous steak on my plate which was great and
when I was half way through and struggling he threw another steak  on to
my plate.  "Oh no I cried, thank you but this is great and is far too
much".  He did no more than lift the steak from my plate and put it into
the dog's dish.  The dog really appreciated it. I had not eaten steak in
at least three years......I was horrified. Also, I had not had a glass
of wine in three years either!

After Marika was born, things went downhill fast in UK. Inflation went
to 28%.  Our mortgage was linked to the bank rate. That went to over
17%.  Every month a letter came indicating that we could pay the same
which would mean we would never ever pay off the loan because it would
go to infinity or, we could pay the stated amount and stay on track.  We
agreed we would stay on track. Each month we had to pay more money which
meant less money for other things like a bottle of wine on a Saturday
night and a steak.  That was why we invested in the digging machine and
were planting potatoes and growing green beans.  We severely rationed
our intake of meat. The reason I knitted everything and made as many
things as I could was because that was the most inexpensive thing to do.
Clothing was expensive.  I saved the family allowance for your new
school uniforms each year - I did not dare spend it on day to day stuff
because the start of the school year was expensive and I did not want
you guys not to have new stuff for the new school year.
America was a wonderful opportunity for us and I remember when I was
first in Fort Wayne, all be it in the blizzard of 78, I felt a sense of
freedom more than I had ever known.  It was down to us. We could sit on
our behinds and starve, or, we could stand up and make a life.  Our
choice.  It was a great feeling.  And, by golly we sure faced a
challenge when Pete lost his job at Bowmar. Thank goodness for the $2000
rainy day fund I stored in the bank.  Thank goodness for my sewing
machine in the basement - I think I shortened every guys pair of pants
in the neighborhood at $4 a go. It was a tough three years.  Pete, lived
out of his car in Florida since we could not afford for him to live
anywhere.  He could not get a job in his field of expertise because he
was not a citizen and had to take what he could.  But you know all of
this and I am chattering on.  But, not once did we want to return to
UK.  We were determined one way or another we will make this work and we
did.

We have a wonderful family and we built a successful business - what
more could anyone want.  Even today, apart from visiting there is no way
I would want to live in UK. Our, "out of the shelter" is definitely here.

I just love these emails, I remember our life in England in the 70's but never realized that my parents were pinching every penny until it screamed, I remember a pleasant childhood, a wonderful garden, cool dresses my mom made for us, and one time some really cool pink fur parkas, and lots of lovely knitted items. I certainly have no negative memories of this time at all, because as an adult, I sew my own clothes and sew for my grandchildren, I knit all the time for myself and grandchildren, my husband and I keep a large garden. One of my favorite shows from the 70's is  The Good Life, a show about a suburban couple who decide to become self-sufficient in Surbiton, a suburb of London, I liked it because my parents kind of did the thing, except my Dad worked and did everything else in his spare time. Maybe a lot of people in England did this sort of thing in the 70's, even if they didn't, it was a great experience for our family and has given me many good memories.

Anyway if you want to read a good book check out, Out of the Shelter by David Lodge. 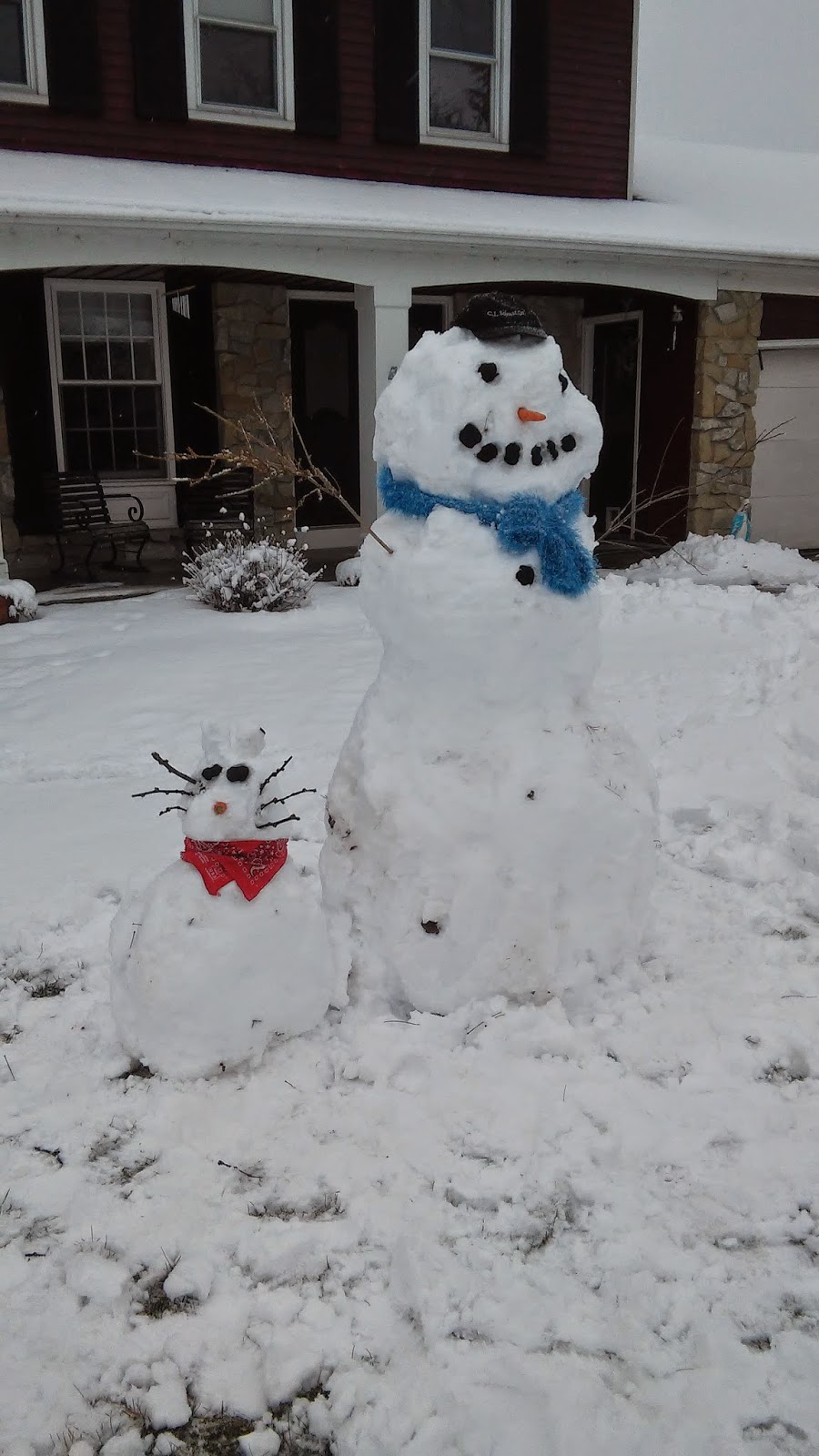 On my previous post I mentioned that we were expecting snow over the weekend. The forecasts at first were vague, but by Saturday afternoon we were under a Winter Storm Warning for 10 to 15 inches of snow. Snow started falling Saturday night and by Sunday morning we had around 4 inches of wet snow on the ground, the temperature was around 32 degrees and the snow had stopped. Dave shoveled the driveway and I went for a brisk walk. It was wonderful outside, the wet snow clung to the tree branches and power lines making everything stunningly beautiful. The snow muffled all sound and it was amazingly peaceful, I stopped along the way to take pictures some are below.

When I returned from my walk I decided to play in the snow and built a snowman and snowkitty, it was fun and I was pleased with how they turned out.

By lunchtime it was snowing again, we never had blizzard conditions, we just had a steady snow all afternoon throughout Sunday night, this morning we awoke to very cold temperatures, twelve degrees, and brilliant sunshine, it looks spectacular outside. We will be off to shovel the driveway in a bit, it drifted heavily overnight, but it will be a joy to be outside and enjoy the sunshine and work together to dig out. I took pictures throughout the day to track the snow accumulation, and cannot believe we ended up with 11.5 inches! 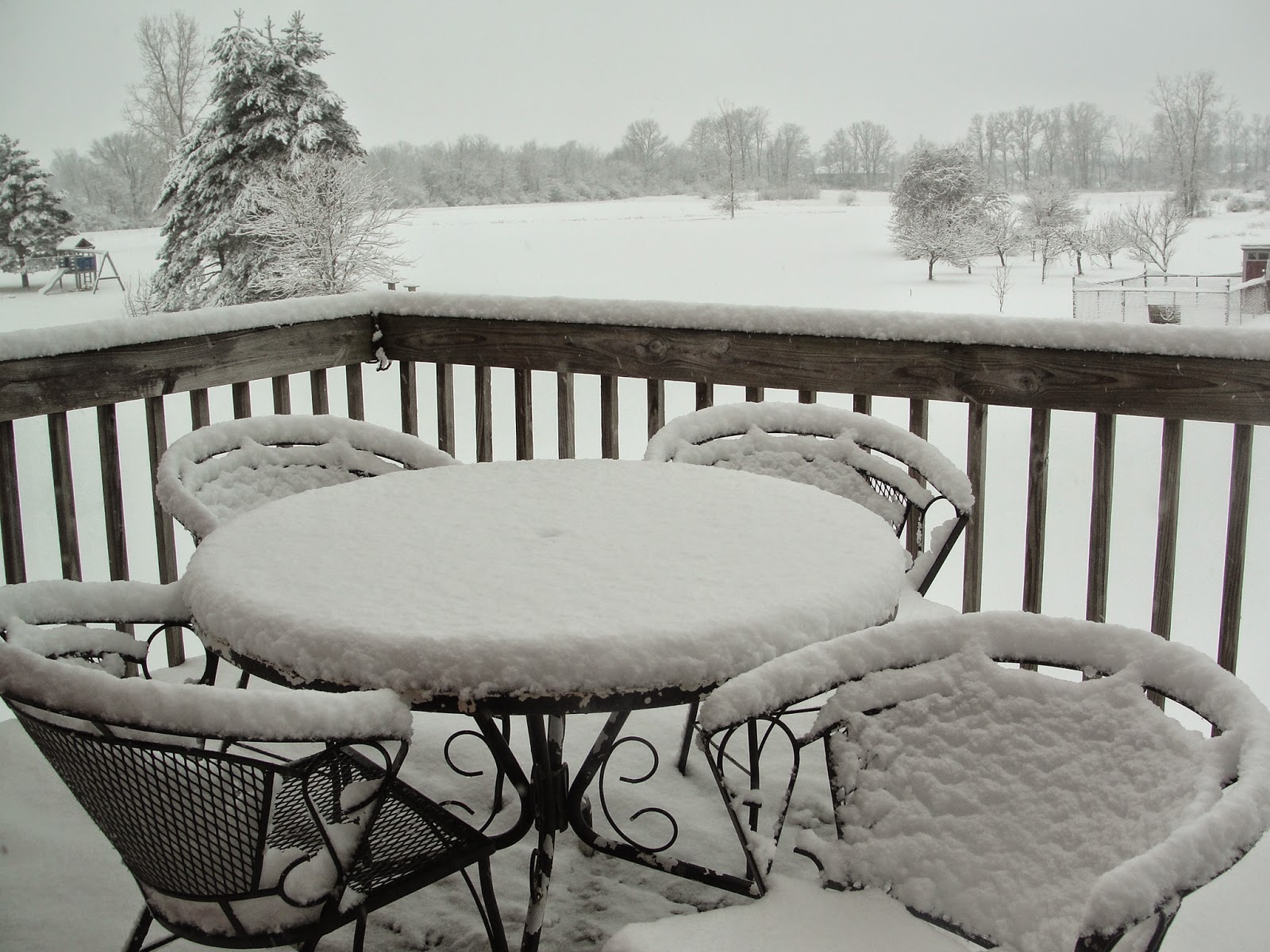 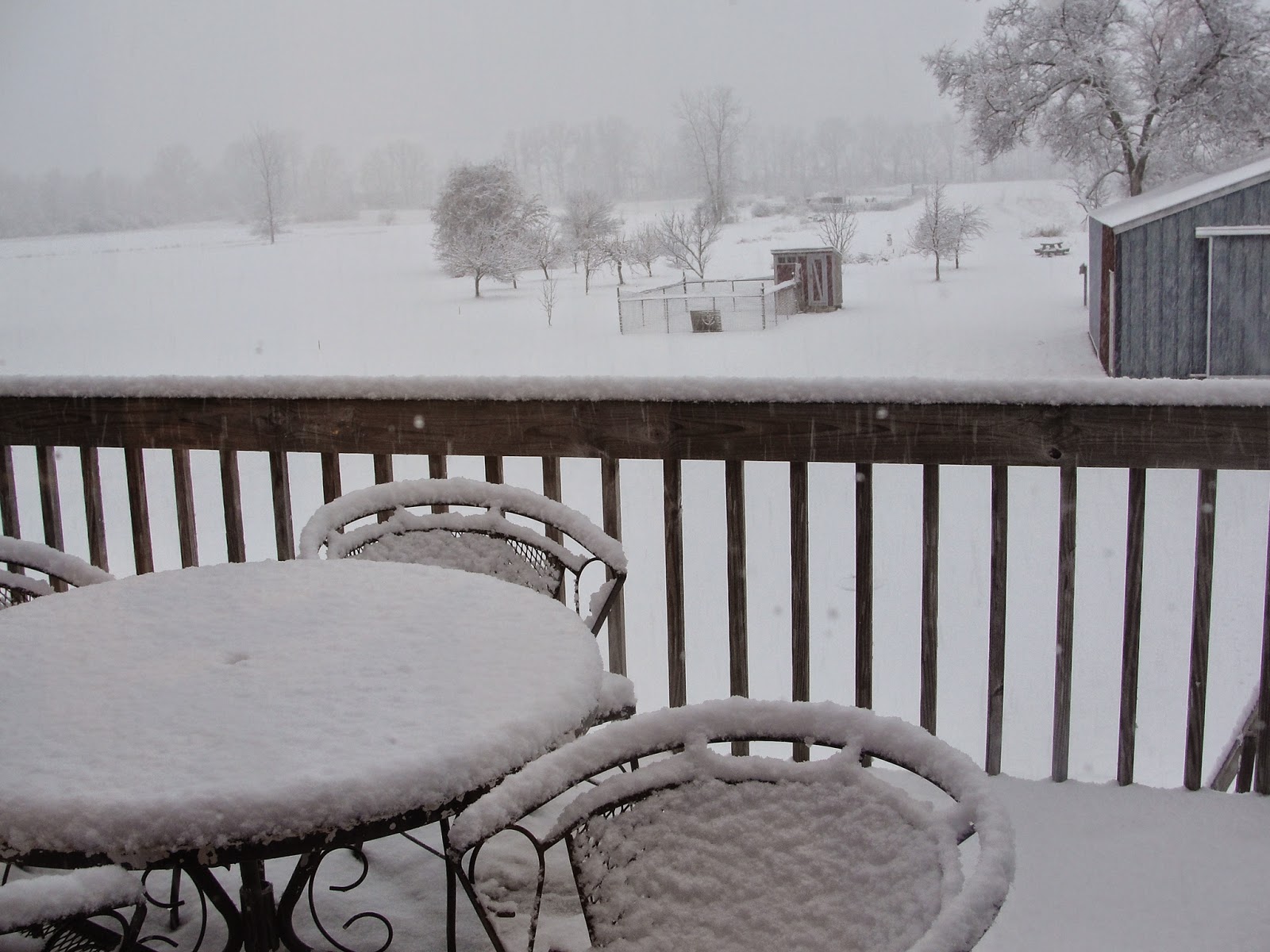 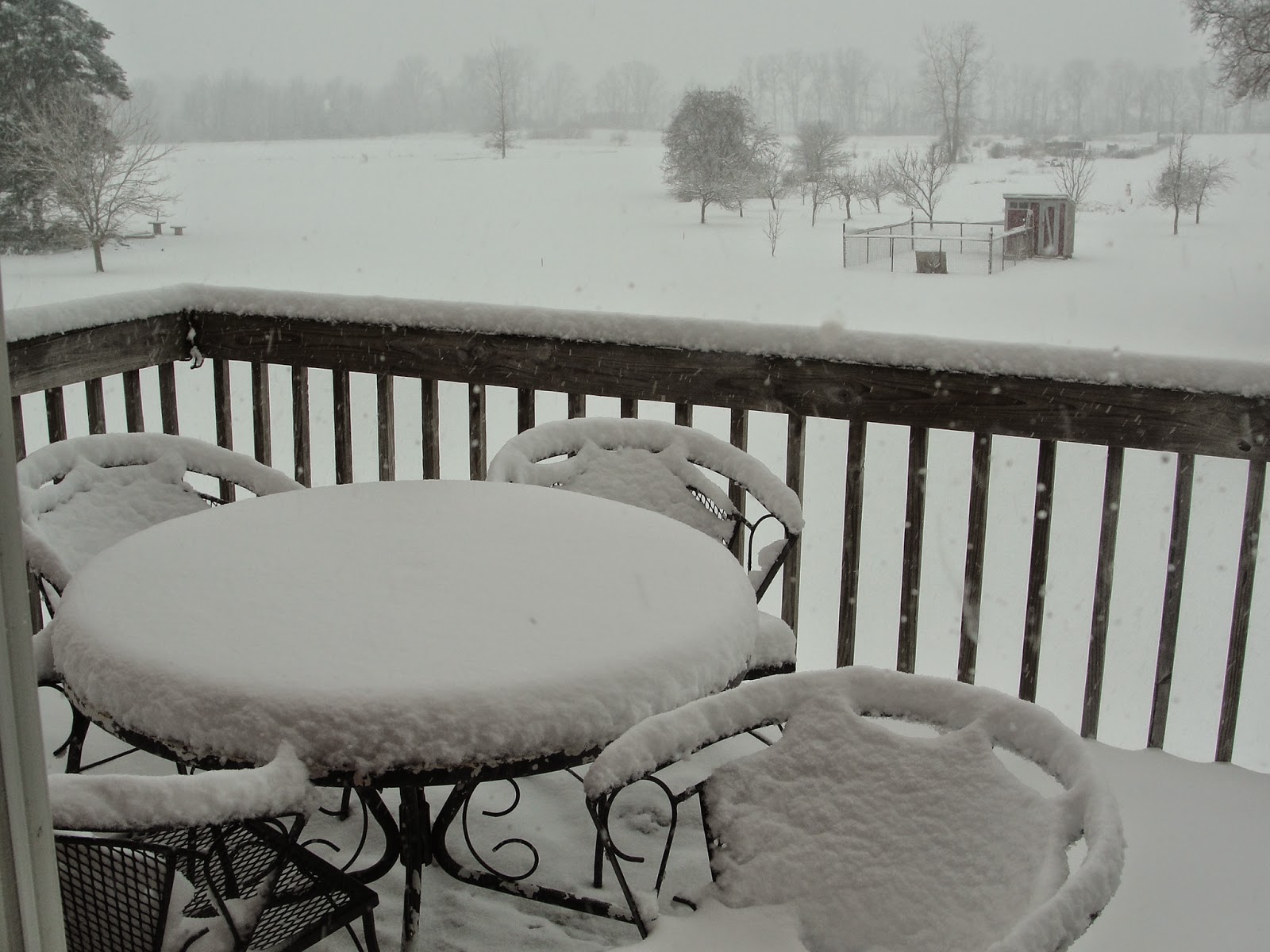 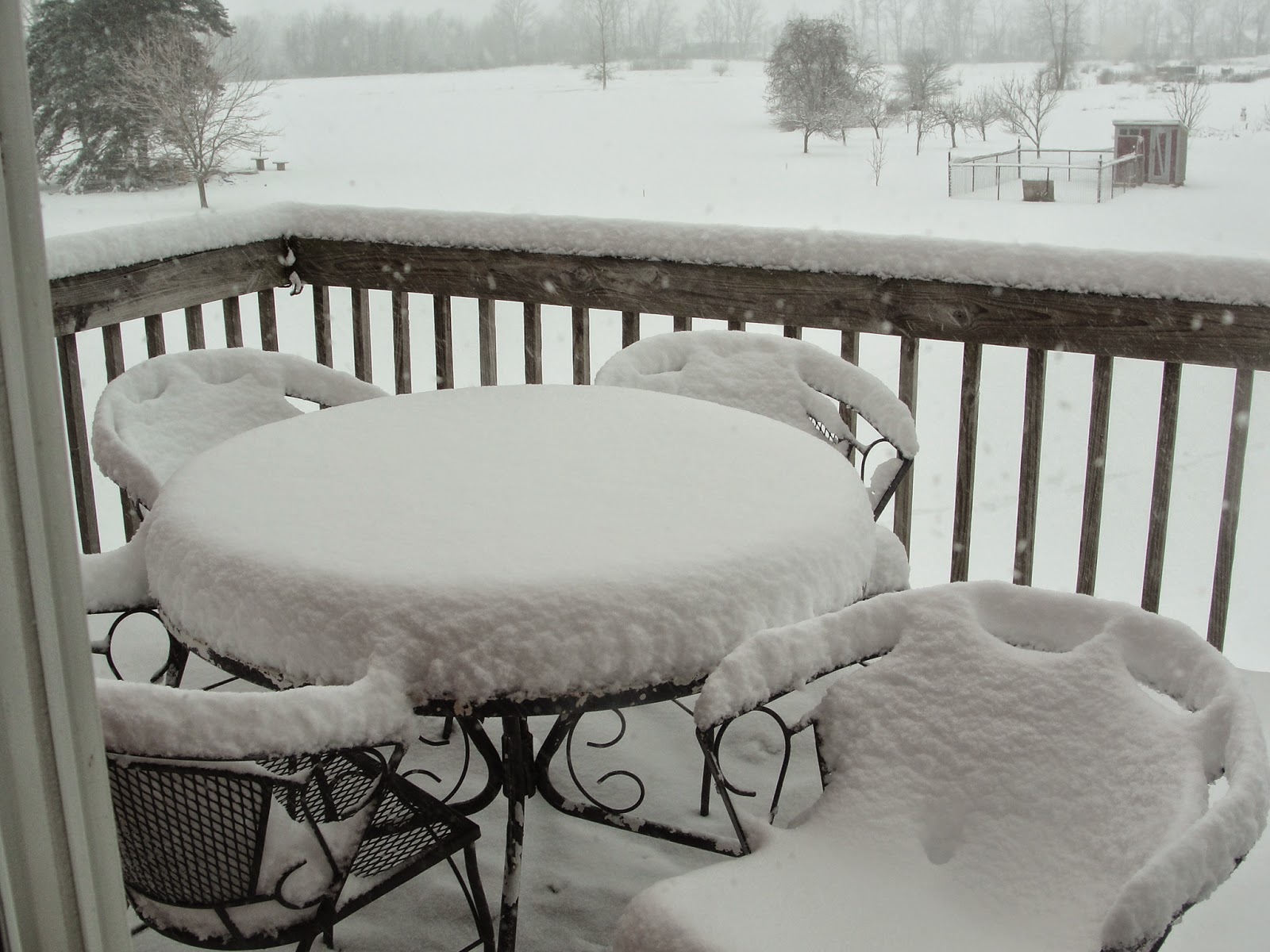 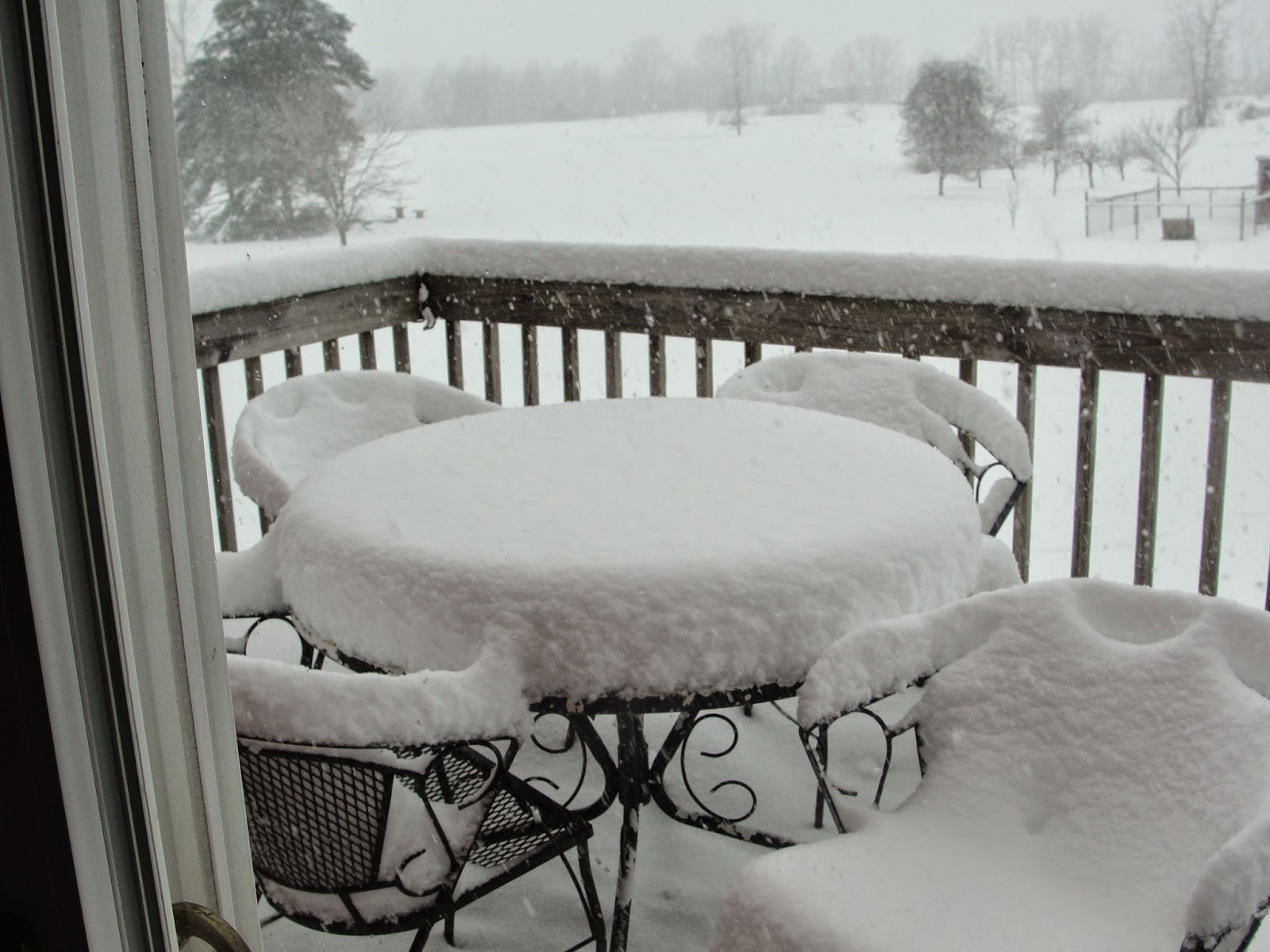 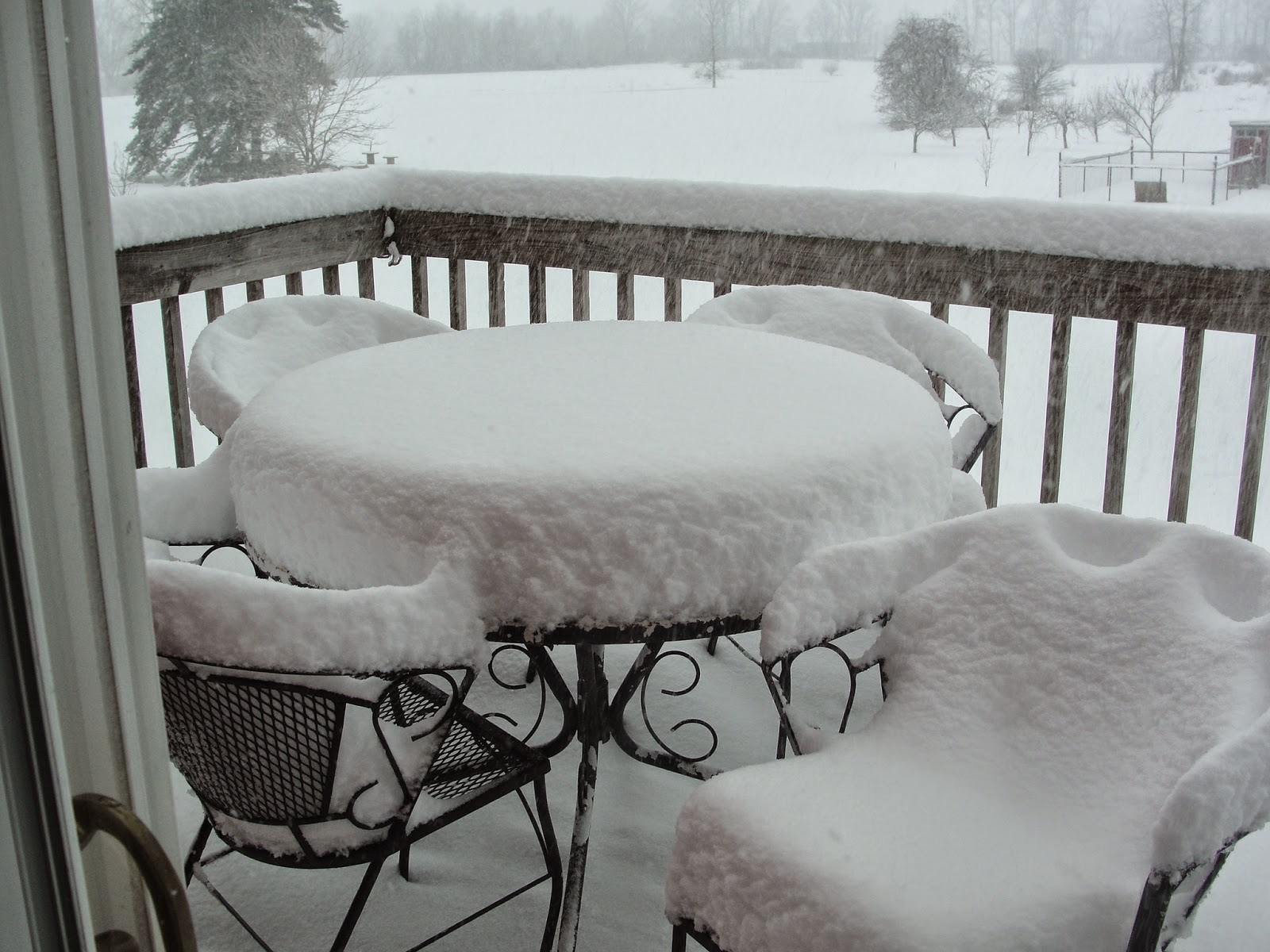 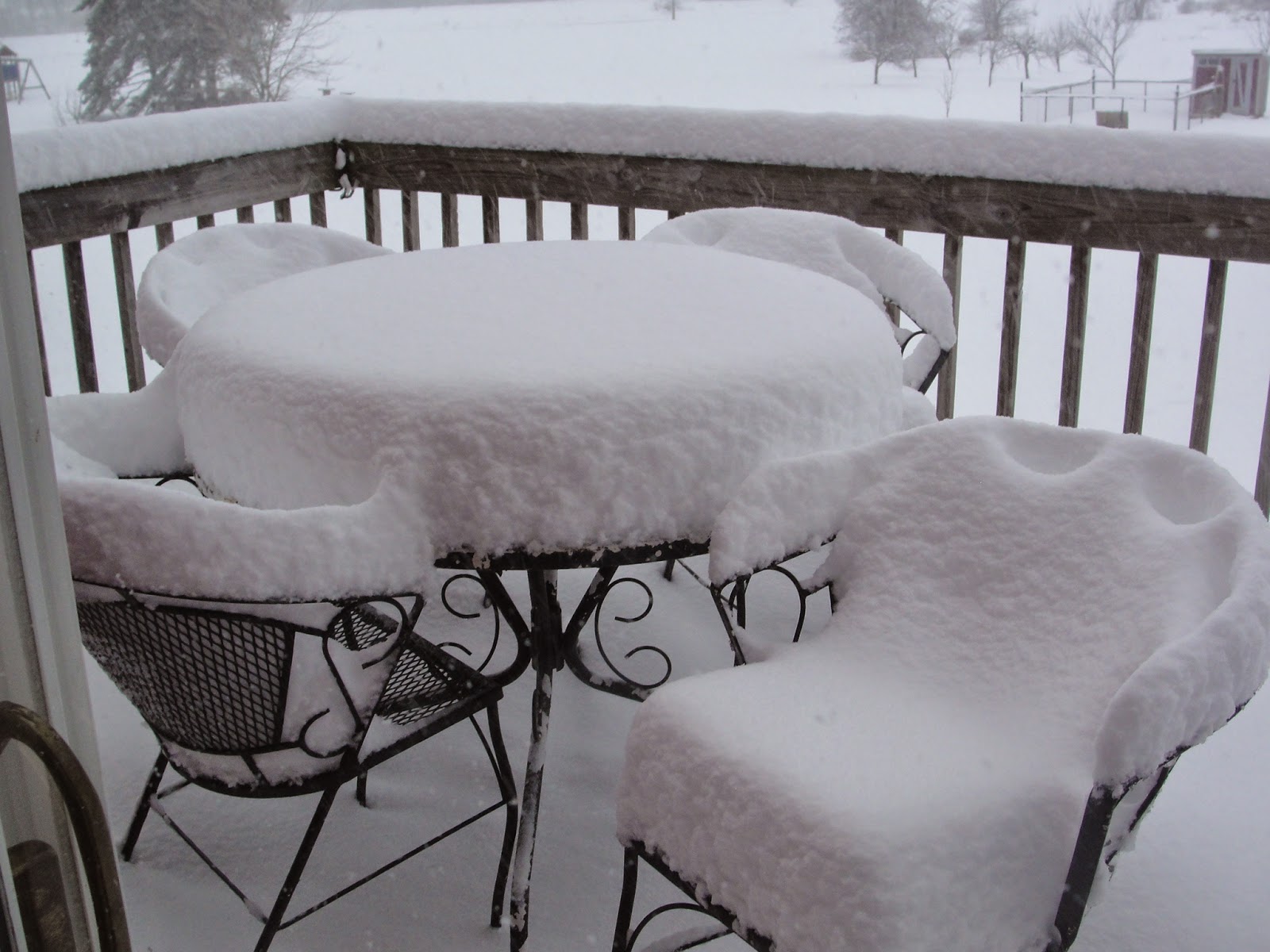 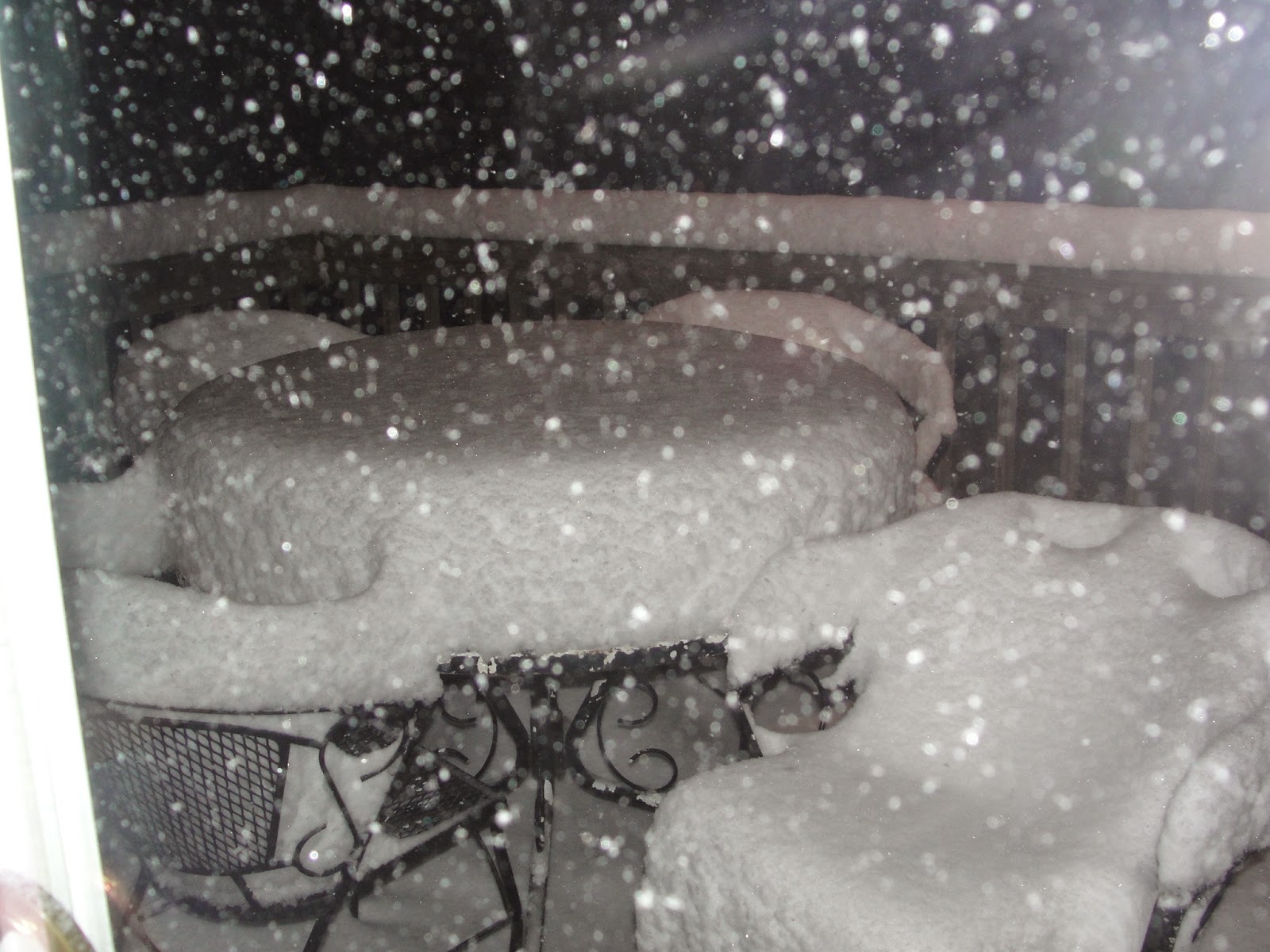 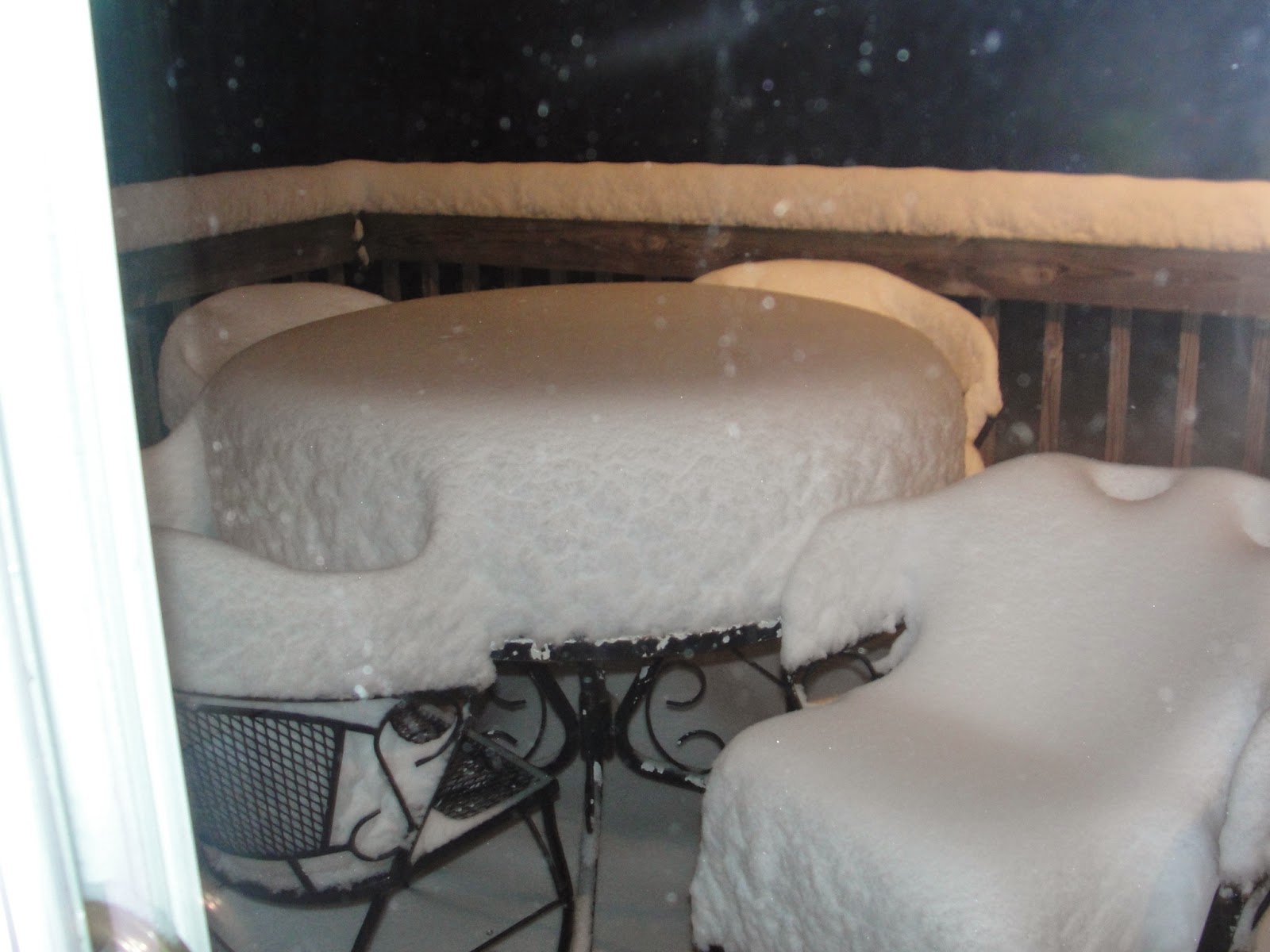 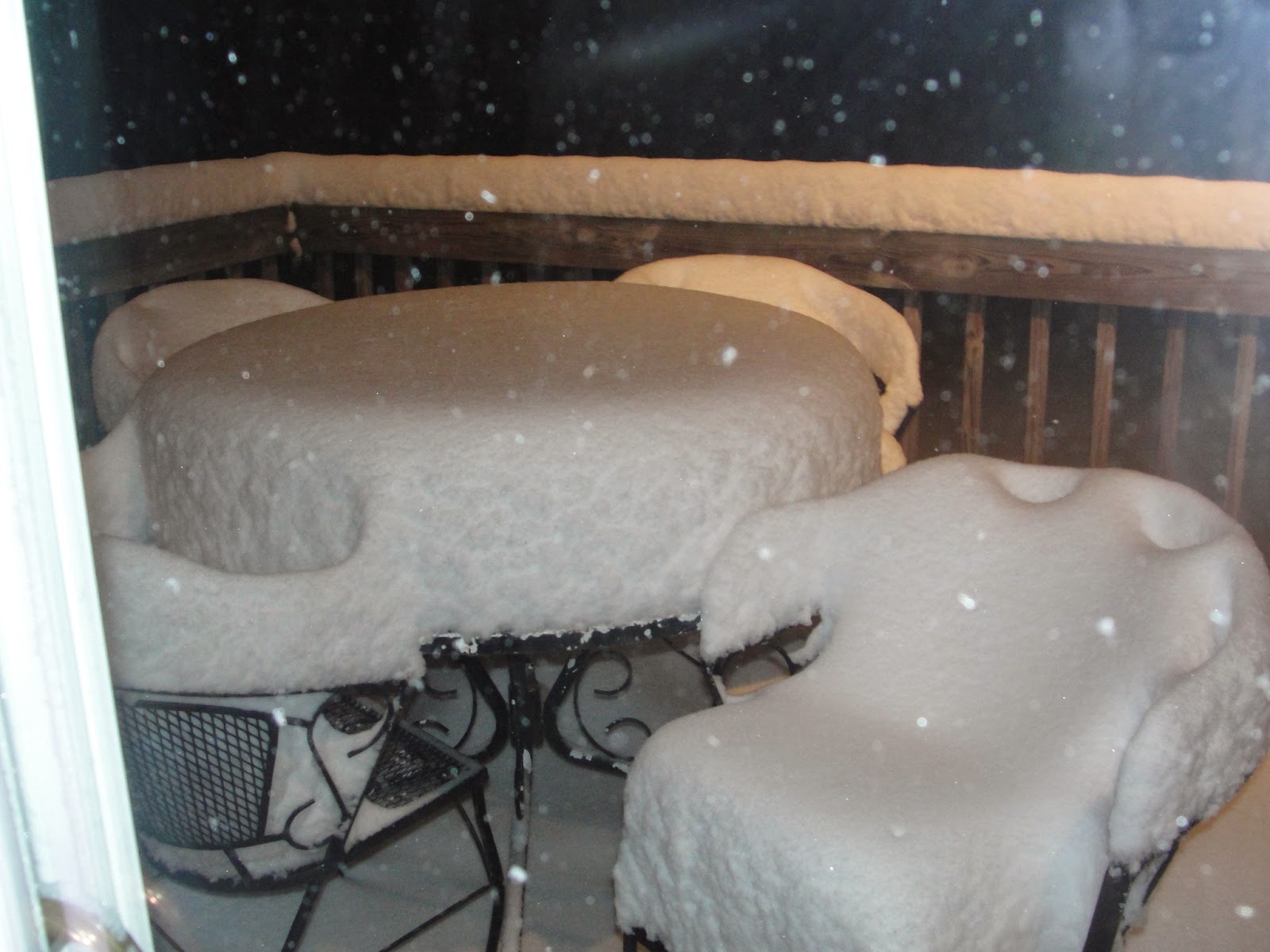 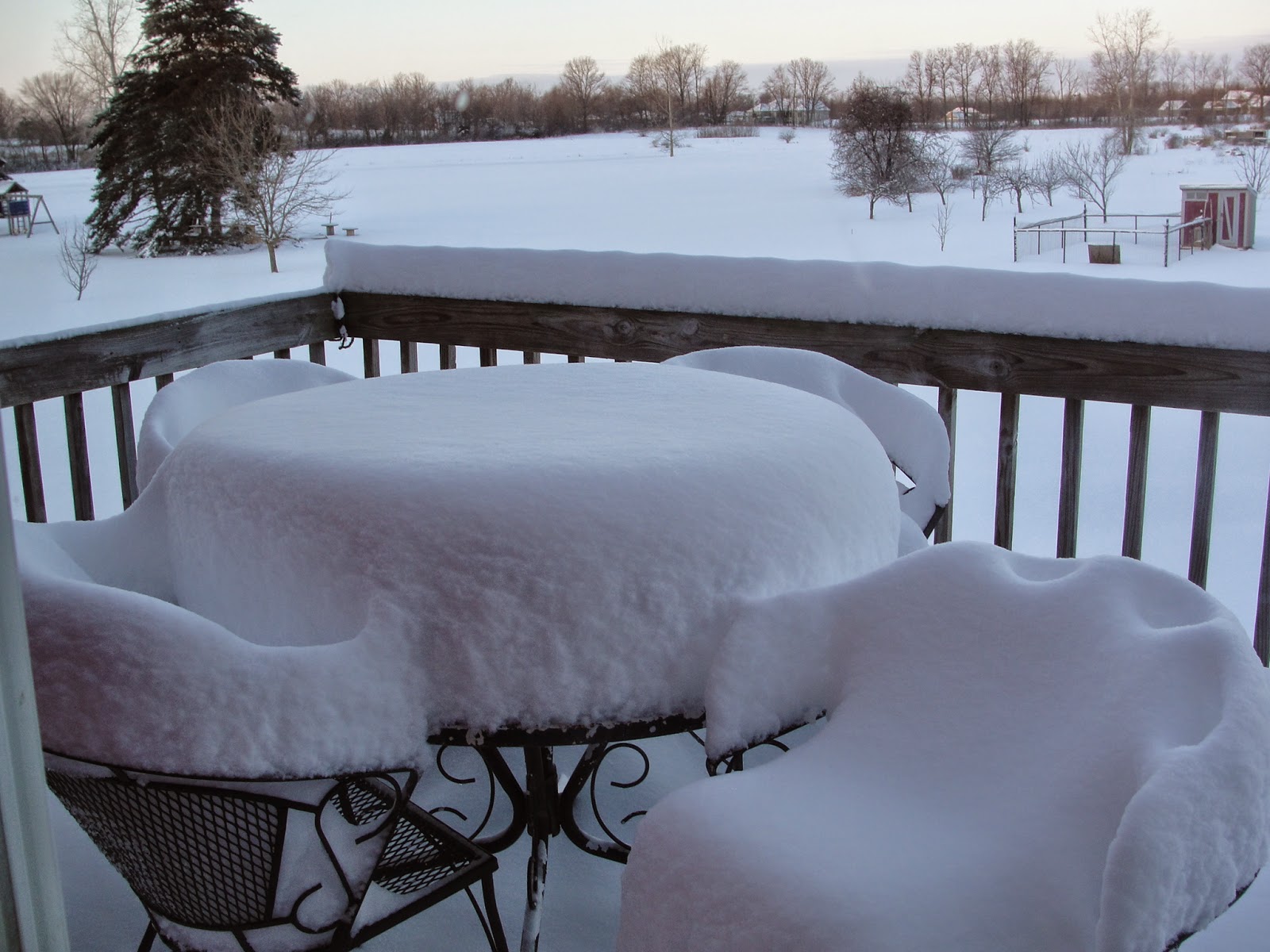 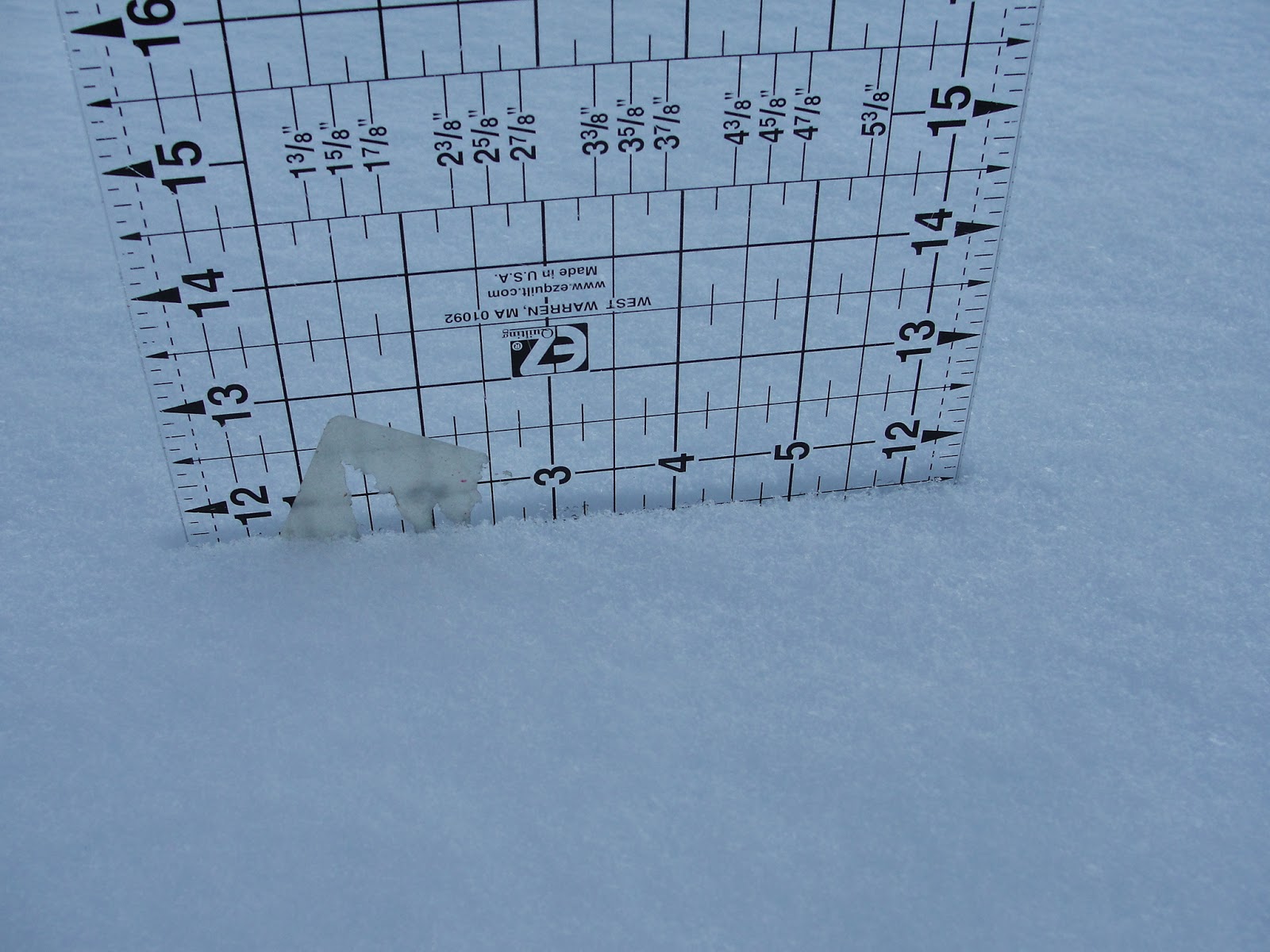 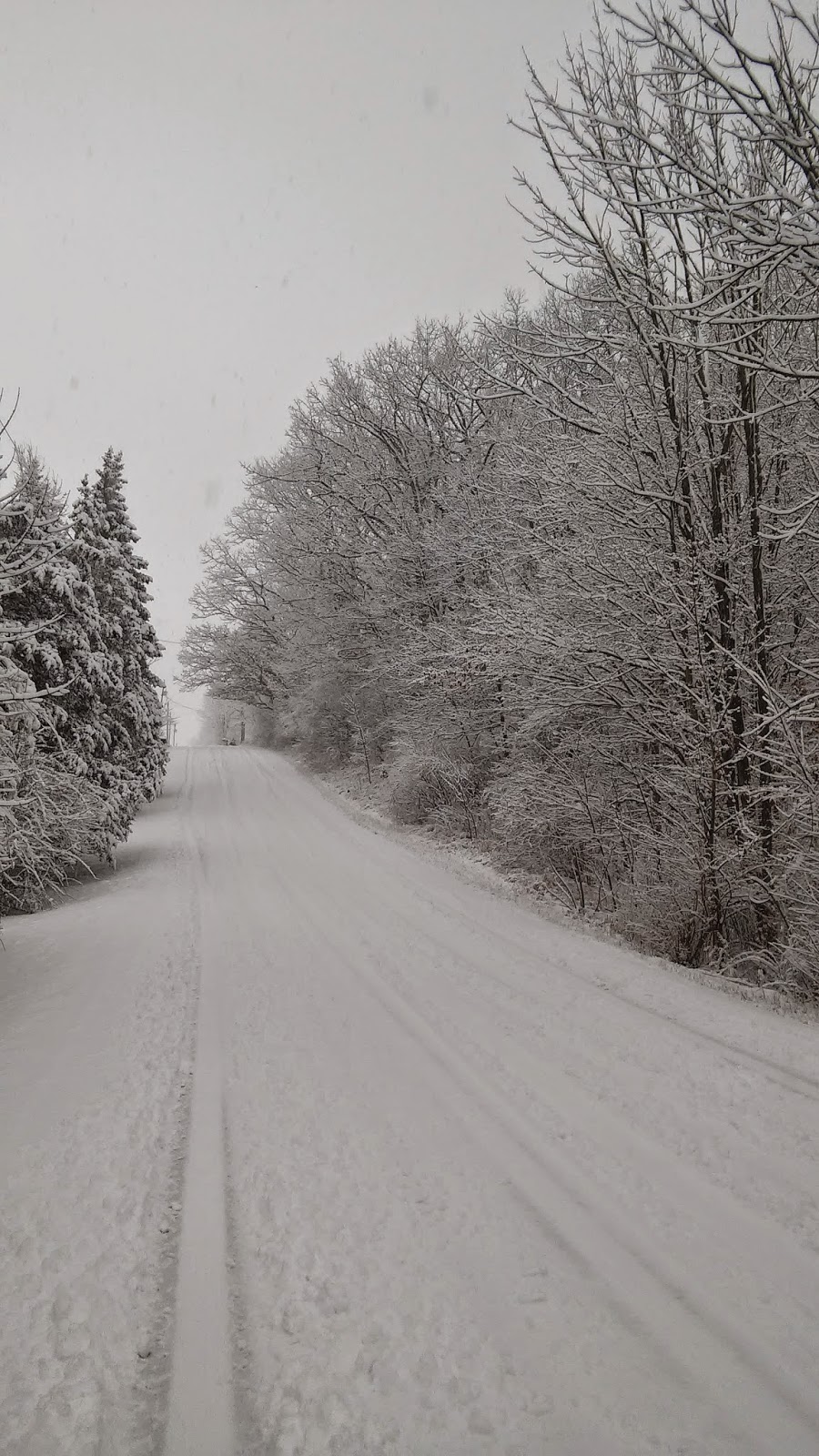 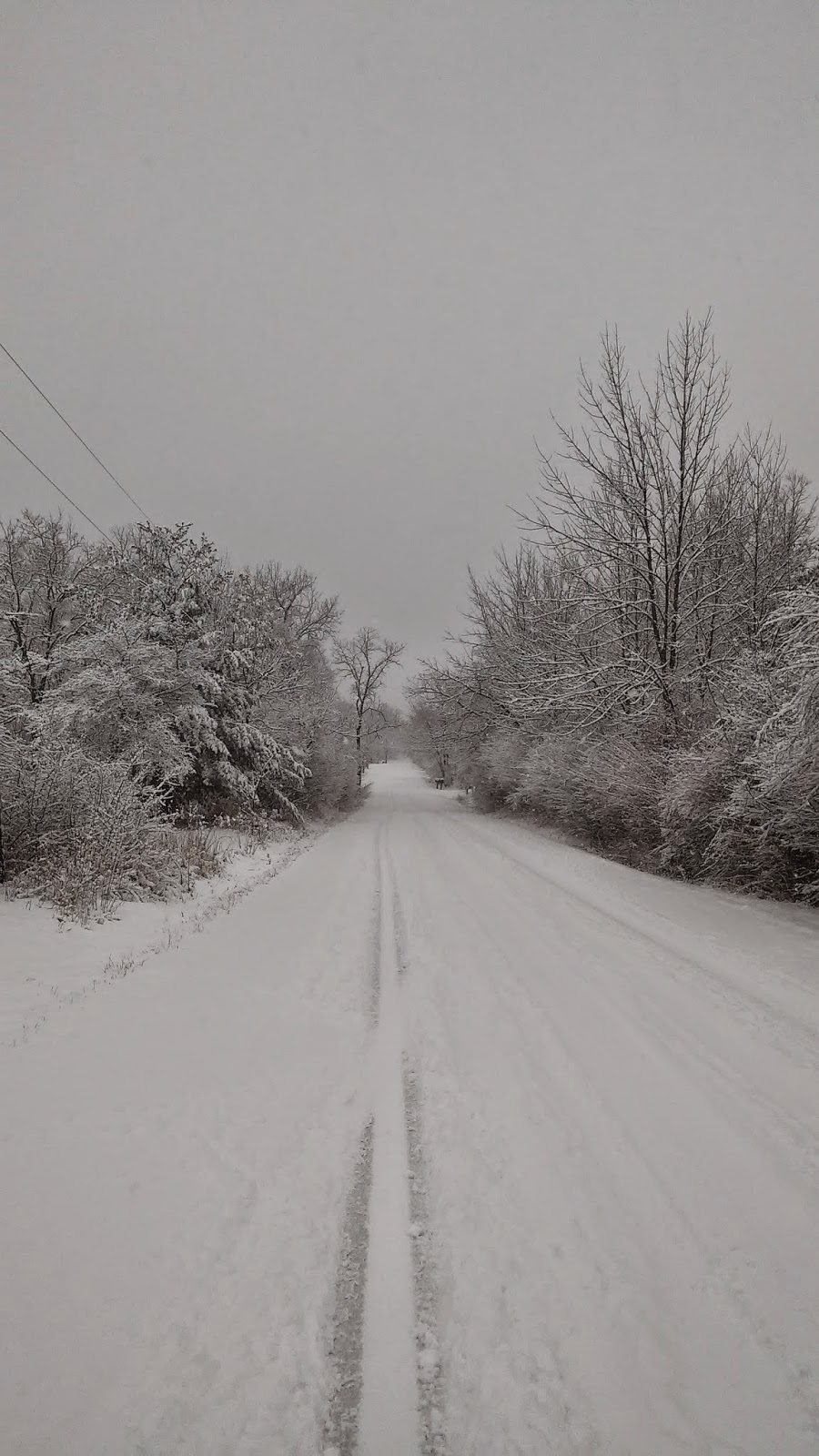 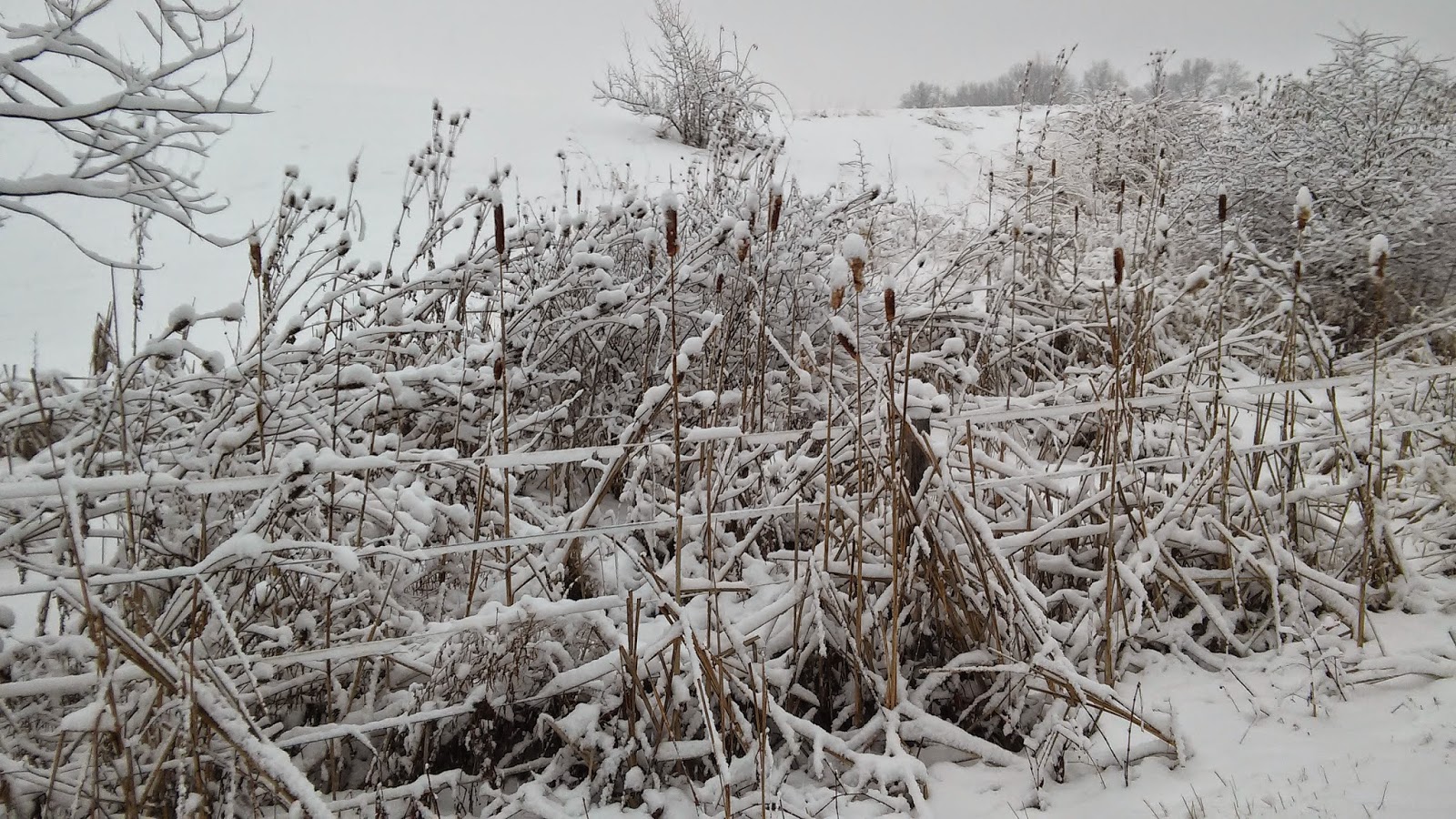