On October 19th of this year we became the owners of fifty broiler chicks, after seven weeks of non-stop eating the cute little broiler chicks were not so cute and were well ready for butchering. For seven weeks I prayed that we would be blessed with good weather for butchering day, and we were, Saturday warmed up to a balmy thirty-eight degrees, the sun shone for most of the morning and conditions were perfect for the task at hand. Dave had a couple of friends come over to help, Johnny and Clayton arrived at ten in the morning, and the 2010 chicken massacre began.
Milk jugs make okay killing cones, they held up through most of the flock, but the last ten or so chickens we held upside down by their feet and Clayton would walk by and cut off their heads, as the milk jug killing cones pretty much were done. A few of the roosters were too big to go head first into the cones so they had to go to the chopping block.
We rented a contraption called the Whizbang Chicken Plucker - an amazing machine, it plucks the chicken clean in about 1 minute, and with forty plus chickens to pluck it saves a huge amount of time.
I really enjoyed my Saturday, we were busy for about four hours, the weather was nice, we all had a good time and all ended up with a nice lot of chicken for our freezers. 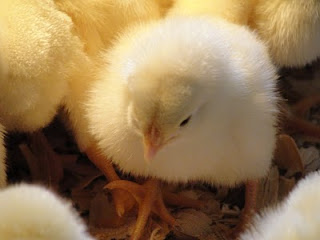 December 11th, into the killing cones 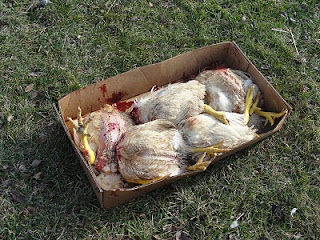 Headless chickens ready to head :) over to the scalder. 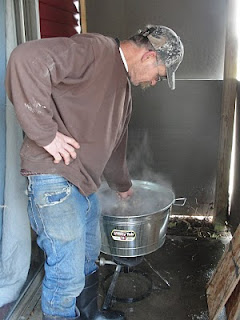 Into the scalder for forty five seconds at 150 degrees. 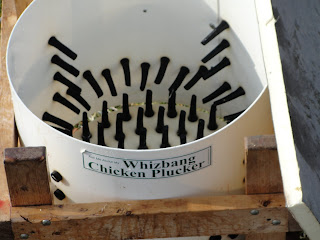 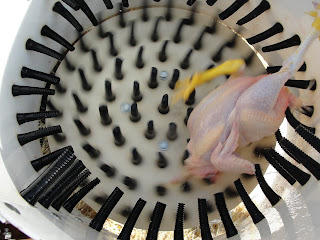 Whirling around in the Whizbang! 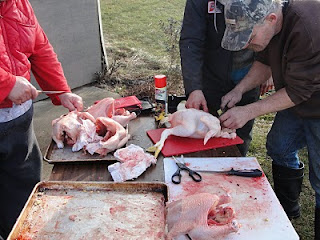 Removing all the nasty bits! 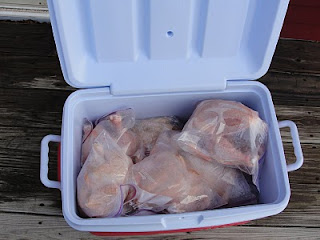 Washed, bagged, and ready for the freezer!
Posted by Bean at 9:13 AM 7 comments: 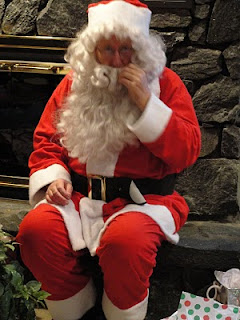 Santa is a bit of blur, he just would not sit still!!! 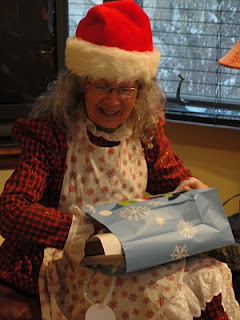 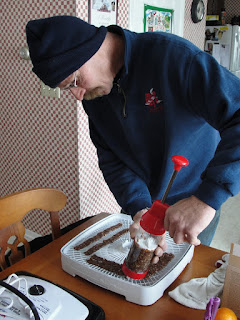 Dehydrator Fun - Making Beef Jerky!
As Santa and Mrs. Claus will be away this Christmas, we got together to celebrate the season yesterday, and it happened to fall on St. Nicholas Eve, which seemed very appropriate. Fun was had by all, as a fine dinner of prime rib was enjoyed and gifts exchanged. Pictured is Dave having fun today with his new possession, a food dehydrator, the first recipe he tried was beef jerky!
Posted by Bean at 5:36 PM 1 comment: