I have enjoyed a fair number of good books this year, I just finished O Pioneers! by Willa Cather - excellent, excellent, excellent. I was introduced to Willa Cather a few years ago when I was in a book club and someone selected Death Comes to the Arch Bishop, it was a very good story. Not high adventure, no dramatic plot twists, just a simple story about a simple man who simply lived his life. It really was a life well lived, and nicely told. And, then the historical look at the western US and how it changed as the white settlers and missionaries arrived. After reading Death Comes to the Arch Bishop I purchased O Pioneers by Willa Cather, it then sat on the bookshelf forgotten for the past two years. Last week I finished The Book Shop by Penelope Fitzgerald and  was waiting for a book to come in at the library, and wondered what to read while I waited, so I perused my bookshelf and was happy to find O Pioneers!

O Pioneers! was written in 1912, and is the story of Norwegian immigrants settling in Nebraska, it is interesting from a historical perspective, and the story is good, it rings true, it could have happened. The main character is Alexandra, she is the oldest sister, the wise person in the family, she with her pragmatic guidance brings about stability and wealth for her family but at a cost to herself. Willa Cather herself lived in Nebraska, her family relocated there from Virginia in 1883 when she was nine, so she knows the hardship, the country, the people, most from Norway, Sweden, France, and Russia (the Bohemians), and the life they led honoring the past yet creating a future. Cather's books really, really give you a feel for the daring, hard grit determination of the immigrant families who left the stability of the known, their homeland, to venture on a long journey to the "new world" and then venture into the "wild west" to create a new homeland. If you have not read Willa Cather, do yourself a favor and read something of hers, it will stay with you.

I have just started a biography of Agatha Christie written by Laura Thompson, it has decent reviews, and I have always enjoyed AG books, and tv/film productions of her works. And in the wings waiting to be read I have Cider with Rosie, by Laurie Lee and A Far Cry from Kensington by Muriel Spark.
I must say Muriel Spark is in my top five list of favorite authors, I have enjoyed everything I have read of hers. Barbara Pym is one of my most favorite authors, I recently re-read the book A Few Green Leaves, she has a gentle humor as gives an observation of life in a small community rather than a plot driven story, nothing really happens yet there is always an undercurrent that something might happen, but probably won't because people are so stuck to the way they are supposed to behave.  The Book Shop by Penelope Fitzgerald is good, the first book I have read by this author who started her writing career at the age of 59, this is one of her early books and it was shortlisted for the Booker award. PF's writing is a bit like Barbara Pym's, it is an observation of life in a small town, but there is much more of a plot, it is a humorous story, really a cautionary tale, but it is also so very, very sad, it is well worth reading. Only 10 chapters, so a very quick read, but a story that will remain in your thoughts.

What are you reading, or have recently read? 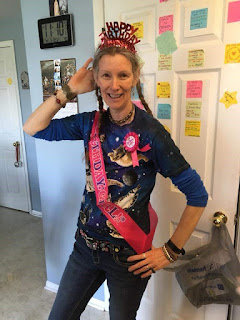 This past weekend my family celebrated my birthday with me, it was a totally awesome day, a day of crazy, chaotic fun with my favorite peoples!

Well lets just say it was odd and a bit nerve wracking. I had no desire to attend any high school reunions, as I had a rather miserable time of it in high school, and lost touch with friends very quickly.

In 1978 we moved to the US from England, a week later I started my Freshman year of high school. It was all a bit of a culture shock, I went from the familiarity of Thurston Upper School in Thurston, England, and students I had attended school with for years, to Homestead High School in a suburb of Fort Wayne, Indiana. Homestead had many more students, and it was so different in so many ways. Just one example would be sports, we played netball, rounders, soccer, and cricket in England, in the US its basketball, football, baseball, and softball, similar games in some ways and yet very different in other ways. Sports has been, and continues to be, a VERY important part of high school life in the US, schools have their own stadiums, sell tickets for games, it is a big business for the school, and a good team brings good recognition too, this goes into hyper mode in the university world. Most students in the US have cars, and since a drivers license is allowed at sixteen, most drive to school. Everything seemed to be in overdrive compared to my English school, probably because there was a lot more money available to fund things like, marching band, concert band, show choir, madrigal choir, fall plays and spring musicals. The prom was a massive to do, the money spent, insane, the dresses beautiful, the venues glamorous, it was unbelievable. No school uniform, so name brand clothing easily determined who had money, who didn't. Everything was different, and it was overwhelming. And then to be a foreigner with an English accent, oh boy, as a shy person it was killing me, always being asked to read things out, can I teach how to speak with an English accent, etc. etc. it was patronizing and embarrassing.

Well, I left school 6 months early as a January graduate and never looked back. I married at nineteen and our first baby was born, we are still married 34 years later, and now have adult children and nine grandchildren, this I would never have imagined in high school. I was busy with my family and life, I had no interest in the five year, ten year reunion, and in fact was not even aware they even took place I had no contact with anyone I went to high school with. My "friends" all felt sorry for me when I got married and had a baby, it wouldn't last, I was throwing my life away, it was so sad, they pitched in a bought a high chair as a baby gift and that was last I heard of them in years. Over the past few years with Face Book I "found" and was "found" by people I knew in high school, we caught up quickly, essentially, are you married or single, have children or childless, working or not working, and after that there was nothing to relate to with each other and the initial excitement of discovering a high school pal dies a quick death. But during this time I was added to a FB group for our 35th high school reunion and after a bit of thought decided to attend.

Dave and I arrived at the venue for the reunion, a large bar, it was very crowded and very noisy. We walked around and could not tell if the reunion was going on or not, there was one group of people standing around and it was possible they were my former classmates, but I wasn't sure. We sat at the bar and ordered a glass of wine, a group of people came in the door and started hugging and doing the long time no see stuff, I thought one or two looked familiar, and about my age, so watched to see where they were headed to, they went to the group of people we noticed initially. Dave and I finished our wine and walked over to the group, I didn't really recognize anyone, and they didn't recognize me. I introduced myself to a couple of people, and they turned out not to be classmates at all, but spouses of classmates. I talked to a few people who I vaguely remembered but never hung out with. Then one of the "popular" girls from high school came over and asked me who I was, I gave my name and she had no idea who I was, and asked if I even went to Homestead, it was very strange. We stayed for about half an hour, my curiosity was satisfied, and I realized that for a reunion to work for a person they actually need to know and stay in touch with the people they are reuniting with, otherwise it is just an odd experience.

I can't say it was a bad experience, I can't imagine going to another reunion because I have no connections with any of the people I happened to go to high school with, but for others their friendships remain strong, they stay in touch, maybe had a much more positive high school experience, and it is an enjoyable time to get together to catch up and reminisce.   I would say if you have an opportunity to attend a high school reunion you should do so, it wasn't a bad time, it was just weird to think that I once went to high school with all these old people!

Peace be with you,