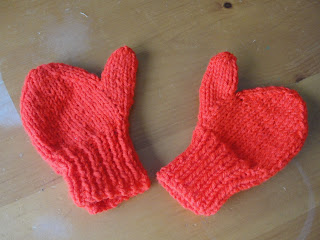 I hope this day finds you well.  I have just enjoyed two toasted slices of my Grants Loaf whole wheat bread, one slice with marmite and the other with marmalade all washed down with a large mug of tea. I just absolutely love the Grants Loaf, and I will definitely make this recipe again and again, it is an excellent tasting bread with a wonderful texture. More info about the Grants Loaf here http://www.beanielife.blogspot.com/2012/01/fun-with-bread.html. 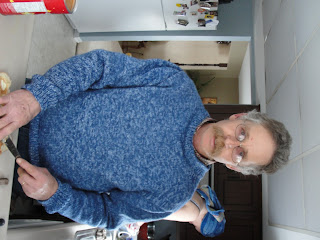 Well enough about my breakfast :) I wanted to talk about my January knitting projects.  I finished the sweater for Dave,  I used the Lions Brand, Vanna's Choice and the color is Denim Mist, the pattern is the modular pattern in my Vogue Ultimate Knitting Book.  I knitted a sweater for grandson Patrick in the same yarn a few months ago and  I am going start on one for  grandson Henry. I will take a picture of Grandpa and grandsons in their matching sweaters as soon as Henry's is done. 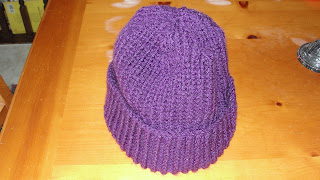 I have knitted two hats this month, one for me, I used the Lions Brand, Vanna's Choice Eggplant colored yarn, it matches my cardigan, and I knitted another in the same brand only a dark red color for Dave.  The pattern came from a book I found at the library, 100 Knitting Projects, by Jean Leinhauser & Rita Weiss.  The stitch used is a Fishermans Rib, it is a thick ribbing, the rows are alternated, one row knit all stitches, the next row knit one below (knit into the stitch in the previous row and let the stitch on the needle drop) purl.  The resulting work is very thick, and very warm and the hats are great. I found a pattern for a Fisherman Rib Sweater in a book from the library, Traditional Island Knitting by Pam Dawson, I plan to knit it for Dave in a slate gray color. 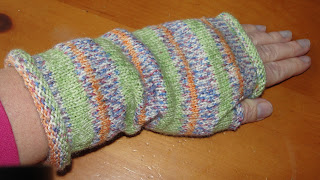 I just finished a pair of hand-warmers for myself, I used a pattern given to me by a friend. There are many free patterns for hand-warmers, or fingerless gloves on the web.  The hand-warmers were knitted on double pointed needles, I still struggle to avoid "ladders" when knitting on dp needles but am noticing some improvement. If any one has any suggestions to avoid ladders on dp needles please advise :). I used a variegated sock yarn to knit with and was very pleased with the pattern created by the yarn and I love the colors.

Grandson Henry wanted some new mittens, I took him upstairs to my yarn stash and had him pick out a color, he chose bright red, I brought the yarn and mitten pattern downstairs and put it on the kitchen table, a little later he brought the yarn to me and demanded, "Make my globbes". Although I didn't start them right that minute, I have finished the mittens, they knit up very quickly. I am going to make Patrick a pair in turquoise. The mitten pattern I use is one that I purchased about twenty years ago, it is Leisure Arts Leaflet 2473 Many Mittens and has instructions for 9 different sizes.  I have lost count of the number of pairs of mittens I have made over the years, but it is many, and they are so nice and warm on a cold winters morning. 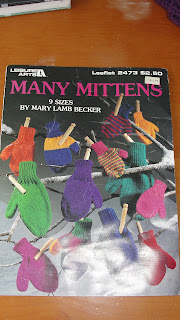 I am currently working on a bonnet, cardigan, and blanket in a light blue for our newest grandson, Charlie who is due to make his arrival into this world on  May 23!!  Henry is very excited about getting a new baby brother, Patrick who is almost two has no idea that his world will change in late May :)
My future knitting goals include the Fisherman Rib sweater for Dave, and a cardigan for myself, this time I am opting for a oatmealish color, but have not yet found a yarn that really excites me, I think I am going to go to a proper yarn shop and seek inspiration and probably be parted with more money than I really want to spend.
What projects are you currently working on?


We have made our own bread for years and years now (I couldn't tell you when we last purchased a loaf :) and although we have our tried and true recipe sometimes it is fun to experiment with new recipes.  Most bread recipes are much alike, a basic recipe will contain flour, yeast, sugar, fat, salt, and water, but any slight change will result in a different end result.  Many recipes call for milk rather than water, and some for a combination of the two, some recipes have butter, melted butter, shortening, or oil and some omit any fat altogether, most have sugar, honey, or molasses, occasionally sweetener is omitted. And then of course there is the flour, white, wheat, spelt, rye, just to name a few, one thing for sure the higher the gluten in the flour the better result you will have. Always make sure that you use bread flour as it is higher in gluten than all purpose or cake flour. Some recipes require that the dough rest, be kneaded, rise, be kneaded, shaped into loaves, rise again and then bake, some completely omit kneading and do a short rise, other require everything be mixed at the same time, some require a sponge start with the yeast, but whatever the method the end result generally is delicious.
Years ago I purchased a bread book at Border's, it was on a bargain table and cost less that five dollars.  The book is nicely done, talks about methods of making bread.  There are recipes for all types of bread and they are separated by country, and each is complimented by beautiful pictures of the finished product.  Today, and yesterday I tried several of the bread recipes in the Breads of Great Britain section.  Last week I made dinner rolls called French Dimples, from the Breads of France section, they were good and we enjoyed them with an onion, beef soup/stew. In the past I tried the English Muffin recipe, they were good but a lot of work to do. Yesterday I made a Grant Loaf, this is a whole wheat bread recipe developed  by Doris Grant, a British nutritionist, in the 1940's, she wanted to create a simple, yet wholesome loaf. The recipe is super easy, 12 cups of whole wheat flour (I did 11 and added 1 cup of wheat bran), water, brown sugar, yeast, and salt, and fat, you simply mix the whole lot together, put it into three warmed, greased pans, let it rise for half an hour and then bake.  You can find many directions to make the Grant Loaf on line, simply google it. The resulting loaf is dense, moist, and very wheaty, I enjoyed a slice toasted this morning with butter and honey, along with an apple and a mug of tea.  I would not recommend this bread for making sandwiches as it is very dense.
Today I made two loaves of herb bread, the recipe had 1 cup of whole wheat flour and 3 cups of white, a mix of water and milk, salt, herbs, (recipe called for fresh chives, parsley, sage, and crushed garlic, I used lesser amounts of dried parsley, sage, a few dried onions as I had no chives, and crushed garlic) and  melted butter, this bread started with a sponge* and required a ten minute knead, and an hour and half rise, it was then shaped into loaves and left to rise for 30 minutes, just before baking each loaf was brushed with beaten egg and sprinkled with fennel seed. The resulting loaves were beautiful, and the bread was mildly seasoned with the herbs but not overpowered, and the bread was light and chewy with a pleasant crust.  I also made the Split Loaf, a white bread with a split down the middle.  This loaf required a sponge* start, it contained no sugar, only, flour, water, milk, yeast, and salt. The process to the Split Loaf was the same as the herb loaf, except it was not brushed with beaten egg and sprinkled with fennel seed. The resulting loaves were splendid, large with a wonderfully crunchy crust and a soft chewy, semi-dense middle. I was pleased with all of the breads and will certainly make them again.


*A sponge start simply means combining the flour and salt in a bowl, creating a well in the middle, adding the yeast/liquid into the well and mixing with a little of the flour to create a wet sloppy mess, then cover the bowl and sit in a warm place for twenty minutes.  The wet sloppy mess becomes a foamy, bubbly mass, simply mix in the rest of the flour and continue on to kneading. Warm a mug of milk, either on the stove, or in the microwave,  then stir in a spoonful of instant coffee!  Voila milky coffee - a pleasant warming drink any time of the day!
Posted by Bean at 7:31 PM No comments:

My Cardigan is Finally Finished :)

I started knitting this cardigan a couple of months ago the color is called Eggplant.  I used the modular pattern in my Vogue Knitting book, http://www.amazon.com/Vogue-Knitting-Ultimate-Book/dp/193154316X/ref=sr_1_1?ie=UTF8&qid=1325874029&sr=8-1 .  The modular pattern offers ten styles to knit, the sizes available are from a childs size 4 to a mans XXL.  I found the modular pattern fairly easy to use and will definitely use it again.
This morning I was determined to finish the cardigan, I had worked on the neck/button band for the past two evenings, I had to pick up 369 stitches on a circular needle and work 9 rows. Let me tell you, 369 stitches make for a very, very long row.  This morning I had two more rows to knit. Everyone left the house by seven, so I put in a DVD from the library, Berkeley Square, and started knitting. Once I had bound off the 369 stitches, I sewed in the sleeves, sewed the the side seams, finished the pockets, took care of all the yarn ends, then finished up by sewing on six buttons.  I thought I had an hour or so of work to do, when I was done, I had watched/listened to all four episodes on the DVD, and then worked on in silence, it took me about five hours to finish the cardigan, but such a feeling of satisfaction upon completion.
I  started knitting a sweater for Dave, it is in a variegated blue yarn, I recently knitted grandson Patrick a sweater in the same yarn, it is Lions Brand Vanna's Choice and the color is called Denim Mist.

Now let me tell you about Berkeley Square, http://www.amazon.com/Berkeley-Square-Clare-Wilkie/dp/B00004W5P5/ref=sr_1_2?s=movies-tv&ie=UTF8&qid=1325875216&sr=1-2 , I found it really enjoyable, I watched the first four episodes and plan to borrow the next episodes from the library.  The story is about three young women, each from different backgrounds, who all wind up working as nannies in three homes located in Berkeley Square, London in the early 1900's.  I would compare Berkeley Square to Downton Abbey, another series I thoroughly enjoyed.

A Simple Meal for a Cold Winter's Evening