The other day as I was walking I was thinking about the Emerald Ash Borer and the devastating effects it has had on the woodlands in our area. Almost all ash trees are dead, or almost dead. Everywhere I walk there are dead ash trees, some homeowners have three or four in their front yards, all dead, others are seen in the woods all dead, it is sad.  As I walked I started to wonder about the Emerald Ash Borer, not a native of North America, it arrived from Asia probably in a shipment of wood and started affecting trees in the NE and quickly spread westward.  My thoughts were along this line, what happens to the Emerald Ash Borer (EAB) when there are no more ash trees? Does the EAB die off? Can Ash trees be reintroduced? Does the EAB adapt to destroying a different tree variety? After I puzzled about the EAB I started thinking about Dutch Elm Disease (DED).  Growing up in England in the seventies we heard a lot about DED, it destroyed pretty much all of the elm trees, again I am not sure if once it ran its course elm trees could be reintroduced, or if the disease was in fact part of the trees DNA?  I don't know much about DED except it destroyed a lot trees just as the EAB is doing right now.
Well after my rather gloomy thoughts about the destruction of trees I was amused by the "LOST BLACK COW" signs that appeared over night and were stapled to telegraph poles every half mile or so, they brought a smile to my face. 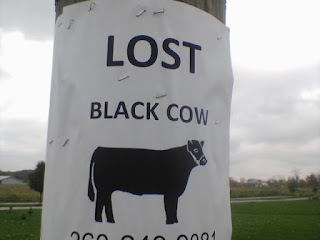 This morning we had a new Farmers Market open in Fort Wayne. The market is indoors and will occur monthly on the first Saturday, October through March, it is hosted at our local Minor League Baseball Park, a nice use of a facility that perhaps doesn't get much use through the winter. I purchased some nice veggies, a couple different varieties of eggplant (aubergine), an acorn squash, my new most favorite vegetable KALE, spinach, an "asian" blend of green leafy stuff for stir fry, and some dried mint for tea. My only non-veggie purchase was an amazingly aromatic bar of lavender soap - boy does it smell truly wonderful. I enjoyed the market, the produce was super-duper fresh, priced reasonably and the vendors were very friendly and willing to share their story and their excitement about organic farming!! 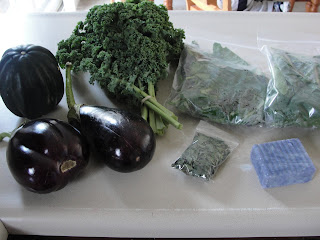 When we returned from the farmers market it was time to head out and bring in the last of our garden produce as tonight we have a "FREEZE WARNING"!  I had the boys pop on their mud boots, and found each of them a woolly hat to wear and we headed off to the gardens.  We picked tomatoes, peppers, onions, and salvaged some cabbage.  The boys helped pick a lot of peppers and then started digging for treasure and there was great excitement when a large rock was found.  Next we took some ruined cabbages to the chicken run for the hens to enjoy.  It was chilly outside, about forty-eight degrees, but fun to be out and about and we enjoyed watching our grandsons enjoy the great outdoors.

I Scared of the One-Eyed Kitty, Gwanma!

For the past several years a one-eyed cat has roamed around the neighborhood, she belongs to no one and each winter she would take refuge in our barn and our next door neighbor put food out for her. How she lost her eye is anybodies guess but it does go to show what a survivor she is.
This summer One-Eye started to look really scrawny and pathetic, I took pity upon her and fed her a few times, usually a few beaten eggs in a bowl, she would not come up to eat until I went back into the house, but once at the bowl she would wolf down the food as fast as she possibly could.  One day I decided enough was enough I would buy some cat food and start feeding her daily, so off to Dollar General I went and came back armed with a couple of small glass bowls, a bag of Meow Mix and several tins of 9Lives wet cat food.  I have been feeding One-Eye every day for a month and she looks so MUCH better!  And although she is very wary of people she doesn't run off anymore when she sees me, and she will rub up against me but will NOT allow me to reach out and pet her yet, I am sure she will eventually.
We have tried to come up with a nicer name than One-Eye, we tried out Marmite for a few days but it doesn't suit her, we joked around with calling her Cyclops but it doesn't suit her either, so One-Eye she is and One-Eye she will remain.
Henry and Patrick do not like to get too close to One-Eye as she is a little off-putting to look at initially.  But whenever One-Eye shows up, which happens throughout the day now, the boys get very excited and tell me she is here, if the food bowls are empty they get the cat food out of the pantry, but they still like to keep their distance from her.  Patrick tells me in his two year old little boy voice that, "I scared of the one-eyed kitty Gwanma", and Henry plainly told me one morning in a very serious voice, "We only like cats with two eyes Grandma!", this amused me to no end.
We now have a second cat coming to feed each day, a sleek, pantheresque black male cat, he is very skittish, and little One-Eye takes no nonsense from him, if she is eating and he tries to join her he is hissed at and swatted around the head, it is a bit comical given he is about twice the size of her..
This morning I fed One-Eye and Bagheera (I have named the black cat after the panther in the Jungle Book, the boys however, refer to him as "the two-eyed cat")  then left the door open and laid down on the floor to take some pictures. If I make no sudden moves and remain very quite Bagheera will not run away, but even when I take food out he runs down the deck steps and then back up and peers at me from a safe distance, I hope he will eventually feel more comfortable around people.  Anyway here are the pics:

Fall Is In the Air - and the Minutiae of My Life

Well here we are October 1, fall is here, the leaves are changing, the weather is cooling, the colors are beautiful.  As I took my walk today I was treated to many splendid sights.  The colors are wonderful as the leaves begin to change. One tree was so beautifully red and gold it took my breath away, it's beauty was so intense I felt as if my heart might break.
As I walked I was accompanied by a chorus of crickets interspersed by chirping grasshoppers, the occasional birdsong, the plaintive honk of a lone goose, and the gobbling of a wild turkey scurrying through the woods.
I clambered down an embankment to take a close up picture of some wild aster, I heard a rustling and scurrying in the long grass, then saw a very large ground hog scurrying as far away from me as he could! 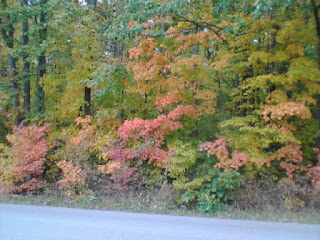 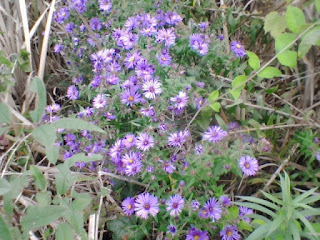 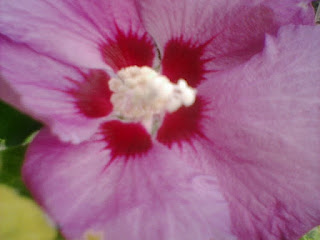 This morning as I read our local paper online I noticed a recipe for a quick soup dinner, I investigated further as I love soup, and was pleased to see that I had all of the ingredients to make the lentil soup.  Do NOT be turned off that it is a lentil soup, I made a pot and it is amazingly good, so robustly flavorful, so perfect for a fall day.  Here is a link to the recipe  http://www.journalgazette.net/article/20121001/FOOD01/310019919/1001/FOOD 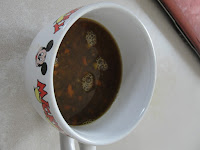 Yesterday I made an Egg Plant curry, I however prefer the pretty name for egg plant so will refer to it as Aubergine curry!! I was reading a post on BLDinMT, link on the right side of my blog, a few weeks ago and thought the recipe sounded interesting.  I added mushrooms, and used garam marsala rather than curry powder. While the curry was cooking, I made a small batch of basmati rice and added it to the curry - wow was this dish ever good.  I will be enjoying my Aubergine Curry and my Lentil Soup over the next few days. 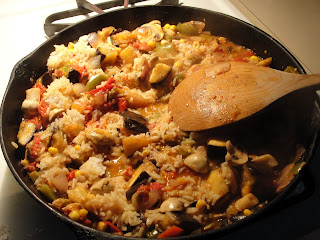 On Saturday evening I made the family Beef Stew Pie, this is a favorite. I simply make a hearty beef stew with lots of potato and carrot and thick, rich gravy like broth.  Once the stew is cooked I make pastry and line my largest cast iron skillet with it, then add all of the stew, then put a top on the pie and pop it into the oven at 425 for about 30 minutes.  Yummy - although the pie is large we never have much left over. 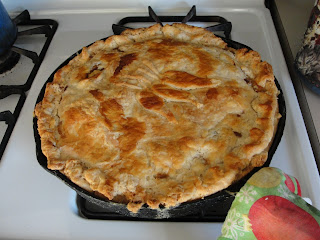