Being Frugal and a Few Other Things


We were pretty frugal people, but since our babies flew the nest, and it is just Dave and I we became less disciplined about our spending. I stopped making laundry soap and started to buy laundry detergent and fabric softener every few weeks, I purchased a lot of convenience snacks for the grand children, I started buying bread, and just became lazy about the garden. Well after a while I got tired of spending money on laundry detergent, it is expensive even when buying the bargain brand, and it always seems that more needs to be purchased. So, I went back to making laundry soap, I spent $6 and have enough ingredients to make detergent for a year!  And, a batch of homemade laundry soap lasts almost a month for us, I can live with spending fifty cents a month for laundry soap and taking fifteen minutes once a month to make it.
I don't even know why we sort of stopped making bread, I guess convenience, and when I have seven grand children here for lunch we go through a lot of bread, and they love toast for a snack. But the cheap white bread from the store is pretty dreadful, nothing at all like homemade. So, I am back to baking all of our bread, ten loaves every two weeks doesn't take much time, and I can make it for so much less than a cheap loaf of store bought. And once a month I bake a large batch of cookies, bag them up and pop them into the freezer and dole them out to grandchildren as needed, much less expensive than buying a bunch of overpriced snacks and having tons of packaging to throw away.
Hanging laundry out to dry, why not, I just got lazy, and with only two of us we really don't do many loads a week so I got into the habit of using the dryer again.
Going to the store WAY too frequently, my goal now is to grocery shop twice a month, rather than average two trips per week to the store. The last time I purchased groceries was October 28, I will need to go this weekend as we are running quite low on supplies.
Gardening, last summer I did not have time, this summer I had more time but the garden was not a priority. Today I went out and gleaned the last of the produce, I have several nice green peppers, a few dozen beets, a few heads of broccoli, and the chickens have a lot of greens to enjoy.
I am good at finding deals at the store, and I will only buy meat/poultry that is reduced for quick sale, BUT only if it is something we will actually eat.  On Monday I roasted a whole chicken, it was just shy of six pounds and I purchased it on mark down for $4.31. The roasted chicken, along with some mashed potato, stuffing, corn, and gravy, fed 7 children, and three adults on Monday evening, the left overs Dave ate for dinner on Tuesday. I boiled the chicken remains and made two quarts of broth. The broth will be lovely for making gravy for future meals, or a base for soup, etc. etc. The total cost of the meal prepared was around $8.50, which is a very good deal for all of the people it fed.

In my last post I mentioned deciding what to do for my next project. I have decided to knit up bunch of yarn that is taking up space in my sewing room. I am knitting blocks and will sew them together to make a cozy throw blanket. 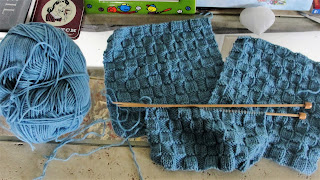 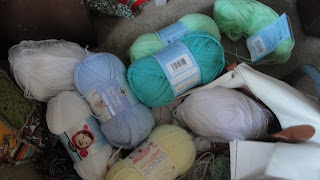 I am reading a book by Neil Gaiman, Anansi Boys, so far so good. Earlier this year I read another Neil Gaiman book for book club, The Ocean at the End of the Lane, it was excellent, I highly recommend it. Neil Gaiman books are a bit other worldly, magical, yet set in a real enough world to make you believe, I like that it is so easy to disappear into the story, pure escapism. 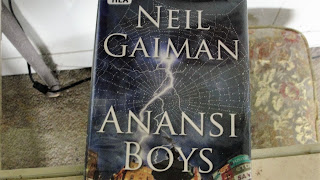 Well I think that is all for now. We are still enjoying a most beautiful November. I put all of the garden furniture away today, and brought in my geraniums for the winter. Now downstairs for lunch, a soft boiled egg and toast soldiers, and a nice mug of tea and then out for brisk walk.

It's so easy to slip into new habits that are less frugal. I find myself doing the same thing. It sounds like you are on a good path now. :-)

You are an inspiration - and that knitting is s clever! xx