A Busy Time of Year 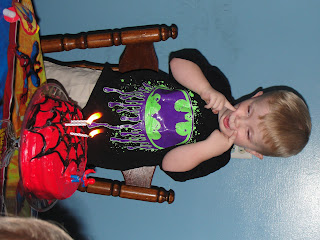 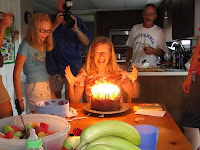 Hello,
I haven't posted in quite some time!! It sure has been busy around here lately.  August was a birthday month, husband Dave and son Ben, celebrated their birthdays on the 8th, son-in-law Brad on the 14th, grandson Henry turned three on the 26th, and my Mom was exactly "three packets of candles" on the 27th. Between all the birthday parties we have all had enough cake and ice-cream for a while. 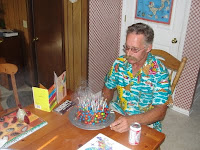 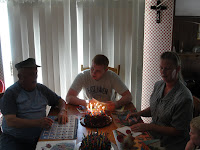 Daughter Emily started her senior year of high school three weeks ago, and started her first job as an hostess at Buffalo Wild Wings, she seems to be managing everything well.

The garden has kept us very busy, I have canned many tomatoes and will be canning more today.  I canned a half bushel of peaches and taught daughter Amber how to can peaches, I don't think she was very excited by the process but was pleased with her quarts of peaches. Our concord grapes are ready, I will be picking as many as I can today and plan to make grape jelly.  The first step in making grape jelly is to juice the grapes, I will start this process today, tomorrow I will have plenty of grape juice to make jelly with. We have also been enjoying cantaloupe and watermelon from the garden, yummy, they are so juicy and refreshing to eat on a hot day. 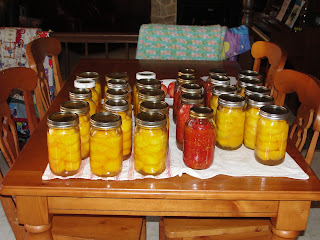 In early July we started a crock of sauerkraut. Dave and I picked about thirty-five cabbages and started the process of making sauerkraut. I shredded the cabbages and tossed the shreds in salt, after a bit Dave would take the shreds and pack them into the crock.  The packing part is hard work, the cabbage shreds just have to be packed, the salt begins to draw water out of the cabbage and eventually you have a brine covering the cabbage. Once the crock is full you add a little more brine, salt and water mix, tuck a cheese cloth over the cabbage and place a plate with a weight on top of that, then move the crock to a place where it will not be disturbed too much.  Fermentation takes about six weeks, it can be a bit smelly, so we put the crock in the basement, each day you must "skim the scum" a gray colored scum that forms on top of the brine.  We sit our crock in a galvanized laundry tub so any mess from the crock is contained.  Always make sure there is enough   brine to cover the shredded cabbage.  We were able to can the sauerkraut a few weeks ago and ended up with seventeen and half quarts - we tried some last week with a pork roast, it was very good.
Now you may be wondering what we are going to do with seventeen and half quarts of sauerkraut, well we will eat it over the next year, and will give a few quarts away.

Last night we took our pig in to be processed, the pig did not live at our property, some friends were raising a couple of pigs, Dave helped last night with the transportation of both pigs to the meat processor.  In about a week our pork, sausage, bacon, and hams will be ready for pick up. I know we will enjoy some of the pork with sauerkraut.

Our hens are doing well, we have seven, one died in the extremely hot weather we had in July, we are getting seven nice brown eggs each day and have a glut of eggs that I plan to start selling.  One of our favorite treats this time of year is egg salad with chopped tomatoes. We only eat this delicious egg salad this time of year because it is best made with garden ripe tomatoes.

This past weekend was Labor Day weekend, we planned to get a lot of painting done but the weather did not cooperate.  Last week we were able to prep and prime the hen house and Dave was able to put the first coat of fresh paint on it first thing Saturday morning, by noon it was too hot to paint and by mid-afternoon the temperature had  reached ninety-six degrees.  The hot weather made it ideal for power washing the pole barn, so Dave started in on that job and then popped down to our neighbor Nancy's house to put trim on her shed. Nancy then had us over for supper later in the evening.

While Dave was busy with outside chores I worked in the house, I had some sewing projects to finish, I made Henry a shirt on Friday, and started on Dave's shirt, on Saturday morning all I had to do was hen the shirt and do the button holes, well my machine has had button hole issues and this it would not make a button hole to save it's life.  I had recently had the machine serviced, when I got it back it worked better than it ever had and the button hole feature worked again, I made Patrick's shirt, then Henry's, although the button holes were looking a little less than desired, and of course the feature stopped working completely.  Boy was I frustrated!!  Dave said I could get a new machine, so after some internet research on Janomes, the only brand I wanted to buy, and a lengthy fact finding discussion with my mother, I arrived at Edwards Sewing Center. After a demo and learning that the Janome Magnolia 7330 had all of the features suggested by my Mom, I purchased the machine. I have never had a sewing machine like this, it is amazing, it sews beautifully, and is an absolute joy to use.  I finished Dave's shirt and shortened a pair of jeans for him and hemmed a dozen napkins. I then went to Jo Anne's and purchased fabric, battting, and interfacing to make a new raggy bag for fall.  My Mom made me a beautiful raggy bag this past spring, I receive compliments on it all the time, I have wanted to make one for some time, so chose fall colors for mine and the Janome performed splendidly. 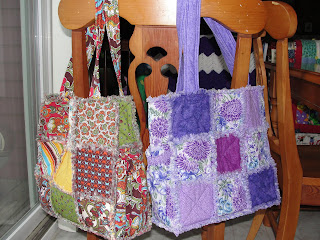 On Sunday the high was sixty-six, a chilly north wind was blowing, and it was very cloudy, and we were cold! On Monday it was still very cool out, we got up early, I always do my heavy house cleaning and bread baking on Mondays so I started in on that and Dave headed out to put primer on the pole barn, he was able to get some painting done, then had to go to Lowe's to pick up five more gallons of primer.

Dave's Dad came over Monday afternoon and we had a nice visit and Amber, Brad, Henry, and Patrick stopped in, Ben was home for the day, Emily had to work, and Matt and Traci were at the lake. We made dinner for everyone, we decided to make beef ribs, we have never made them before, we followed a recipe but after two hours in the oven they were still too tough to eat, so we thawed some hamburger to make burgers, and I decided that it wouldn't hurt to put the ribs in the pressure cooker, which turned out to be a good decision, because thirty minutes in the cooker and the beef was tender as could be and falling off the bone.  So we ended up with rather a lot of meat, the plan B hamburgers, and the salvaged beef ribs, we also had spanish rice, macaroni and cheese, corn, banana pudding and pumpkin pie. The nice about preparing a large meal is that there are always enough leftovers for supper the next day, and the next day!

Anyway it has been busy lately, once the garden is finished and the pole barn is painted things will slow down  and we will have the winter to rest.  By February we will be anxious to start planning our garden for next year.
Posted by Bean at 8:41 AM

Wow! No wonder you haven't been feverishly blogging! What a wonderful, satisfying account of hard work and thrift and creativity - WELL DONE THAT GIRL!!! :0)

Hi! My name is Melissa and I am visiting from Gill's page. I am going to try your cucumber salad from the previous post -- sounds delicious.

Hi Boyett-Brinkley, thank you for visiting. I hope you enjoy the salad.