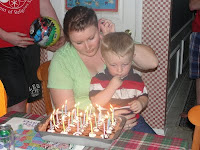 Amber with Henry thinking about how they are going to blow out all of those candles! 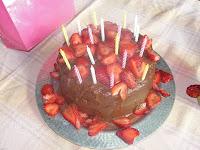 Emily's birthday cake. Yellow cake with chocolate frosting and fresh strawberries. I sliced the strawberries early in the day mixed in a little sugar and let them sit for a few hours, they were nice and syrupy when I placed them on the cake. 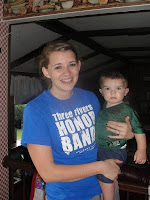 Birthday girl Emily holding her nephew Patrick.
Ice Cream Cake
1 package of Oreo's
1 stick of butter
2 cartons of ice cream ( we like Breyer's)
Whipped cream
Hot Fudge or Hersheys Syrup
9/13 covered baking pan (or use foil to cover)
Put the entire package of Oreo's in the food processor and blend. Add to the oreo's 1 stick of melted butter and blend well. Put the oreo mixture into a 9/13 pan, bake in the oven for eight minutes at 350. Remove pan from oven, put hot fudge sauce, or hershey syrup over the oreo base, let cool. Put out the first carton of ice cream, we used vanilla, let it sit out for about twenty minutes to soften, carefully spread the ice cream over the oreo base, cover the pan and return to freezer for an hour. Sit out the next carton of ice cream, we used chocolate, carefully spread the softened ice cream over the vanilla layer, cover and return to freezer. Decorate with whipped cream and drizzle hot fudge or hershey syrup over the top to decorate. I used Redi Whip, and made 25 florets on the cake, I used these to place the birthday candles for Amber. Cover the cake, put in the freezer overnight. This is a really nice summer time "cake", make sure you have enough people to eat it all in one go as it will melt! You could double the recipe to make a cake for a very large group, or half it for small group, you can add whatever flavor or flavors of ice cream you like, and whatever toppings you like. We had a large group and all but one piece of "cake" was eaten.
Salsa
1 quart of tomatoes
1 clove of garlic ( I buy the jar of crushed garlic so about 1 tsp of this)
1 hot pepper ( I have a jar of sliced hot peppers, I use about seven slices)
1 onion cut in quarters
1 bunch of cilantro
1/2 tsp of cumin
1 tablespoon of lime juice
1 tsp salt
Put all of ingredients in the food processor, blend well. My family loves this salsa!
Posted by Bean at 9:02 AM

I certainly appreciate the ice cream cake recipe. My oldest would love that for his birthday this summer! ~Liz

OOO, that salsa recipe looks good--and so easy. Thanks!

Glad you've got everybody back home. Must be a great feeling!

It sure is a great feeling, it was wonderful to say good bye last night and not feel sad that they only had a few days home on leave, instead I felt joyous because they are home for good!